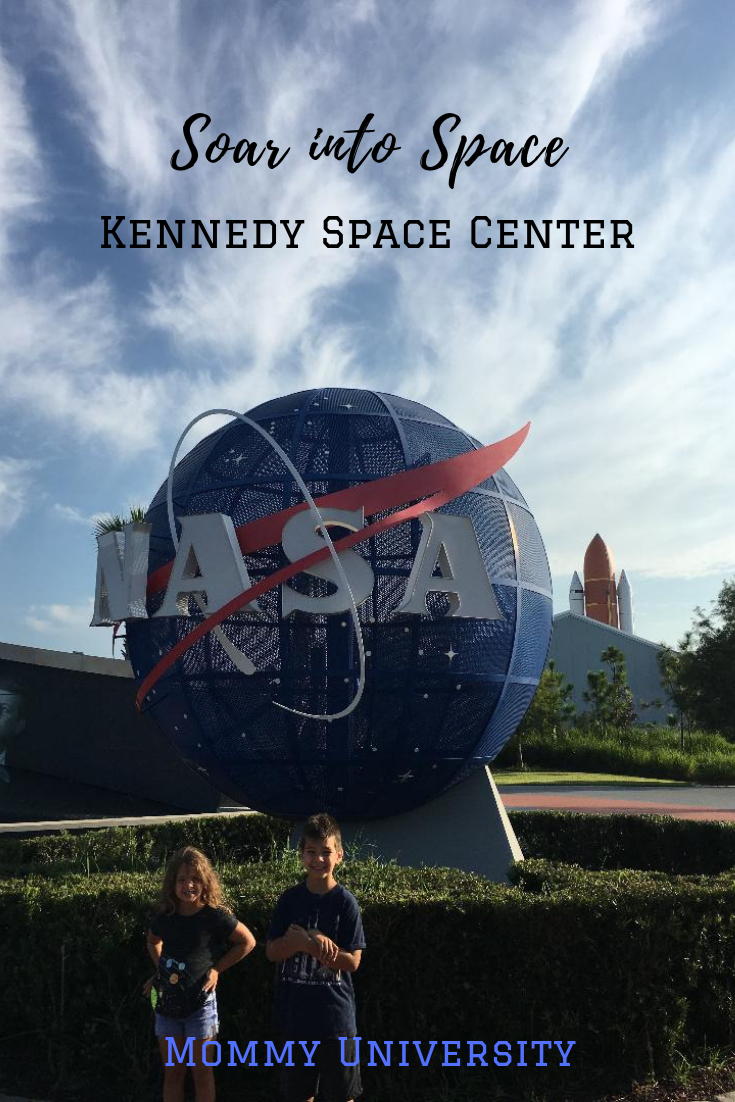 Whether you imagine flying on a spaceship during an action film or what it would have felt like to be the first human to step on the moon, Kennedy Space Center taps into the longstanding history and magic of outer space. Located on Cape Canaveral, this is the location for shuttle launches for the United States. The Kennedy Space Center (KSC) is not only iconic but it is symbolic of the best qualities of the American dream which is threaded in each of the exhibits. Determination, grit, imagination and resilience are all qualities that empowered mathematicians, engineers and pilots to ascend into space.

Visiting the Kennedy Space Center has been on my family’s bucket list since my son became fascinated with Scott Kelly, a New Jersey native, and the International Space Station. Located in Central Florida, it is a little over an hour outside Orlando. The massive complex is organized thematically into several missions that contain different exhibits. Although we arrived a half hour before they opened and spent every minute in different exhibits (and did not go to the movies), we still didn’t have enough time to see everything. If you have a child or family member with a big interest in space, you may opt to attend for two (or more) days. We are already planning a return trip when both children are ten years old and can participate in the add-on enhancements!

So, what makes the KSC an out of this world destination? Well, have you experienced a launch simulation? Have you heard first hand from an astronaut about their experiences? Have you sat in a rocket? Have you walked through the International Space Station? The KSC offers immersive experiences to enhance your understanding of each facet associated with this legacy program. We wanted to breakdown highlights from each section to help you better understand what to do and see!

Highlights from the Kennedy Space Center The home to the retired Atlantis is located in the Shuttle mission and is not only interactive but it is also visually stimulating. The initial entrance to the Space Shuttle Atlantis begins with a brief movie on the history of the Atlantis which also carries a message of determination and collaboration. The next room opens to clips of the different launches but what happens next is that the primary screen becomes transparent and lifts to a view of the Atlantis. With 33 mission under its belt, this shuttle redefined space travel and took over 12 years to design and build which makes it a testimony to resilience. Within this building, are so many hands-on activities that your children will be running around as they are learning. Whether it is climbing through a simulation of the International Space Station or jumping on the Astronaut Training Simulators, the must do experience is the Shuttle Launch Experience. As you learn about the training required and veterans of the program share their experiences, you are being guided to a launch simulator. After being buckled into the seats, your body feels a rush of adrenaline as you feel like you are being hurdled into space. Even as you are waiting to enter, the Rocket Garden is a towering presence! This garden of giants are not only immense in size but are also feats in engineering. Gemini, Apollo and Mercury are all represented. While some rockets are simply there to be marveled, others you can climb inside. This exhibit is outdoors so when exploring you may want to consider the weather and visit this early in the day or later in the afternoon. The first building you will encounter after the entrance contains the US Astronaut Hall of Fame as well as an exhibit called Mission Control: The Unsung Heroes of Apollo. The first room you enter is circular which features a movie with vintage footage and recent commentary on what it means to be a hero. Following this is a 3D movie that features the individuals who enabled the Apollo program. As the wind blows in your face, you will be impressed with the imagery, messages and music throughout the exhibits. After the interactive exhibit, you can stroll through the Hall of Fame.  Personally, I loved finding the faces of astronauts who were names from my childhood. In this mission, you can watch a space related movie in the Imax theatre or look at the new Mars Rover prototype, but most of our time was spent at Journey to Mars. This darkened room reminds me of a space themed arcade with hands-on stations to test your knowledge and skills. We enjoyed a brief presentation on the importance of travel as well as mock ups of Mars rovers. Essential to your visit is the bus tour that drives you to all the key locations of Cape Canaveral such as the launch sites and the Vehicle Assembly Building (VAB). The bus drivers take great pride in their profession as they interject stories and facts as well as identify points of interest in the Wildlife Refuge (you will be amazed by the enormous bald eagle’s nest or the occasional alligator). When the bus drivers are not talking, movies play that introduce the next hot spot on the tour. The bus tour absorbs a minimum of two hours and transports you to the Race to the Moon mission. The bus tour is a Must Do experience!

Race to the Moon It is the 50th Anniversary of the Apollo missions and the Race to Moon mission is absolutely stunning. If you enter the building at the bus stop, you will be prompted when to enter to watch a retrospective film that is only a few minutes long on the history of the Apollo program. The next stop is the Apollo 8 Firing Room where you can watch the original launch of the Saturn V rocket. Following this, you can stand beneath the iconic ship and walk through additional exhibits like Moonscape or Apollo Treasures Gallery.

Setting aside a full day at the Kennedy Space Center, you may not get to see all the exhibits thus you may need to pick and choose which missions to focus or visit for two days. Whether you stare up at the night sky and enjoy the new Star Wars film, visiting KSC is one of the most impressive and amazing experiences my family has encountered.