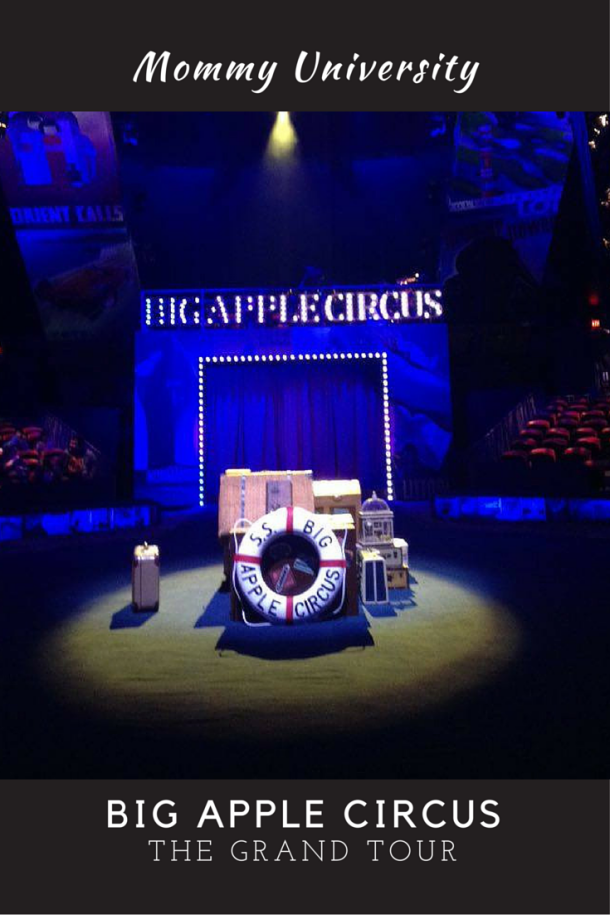 Next to the TD Bank Balllpark in Bridgewater, The Big Apple Circus has been raising the big tent for 38 years capturing the imagination and wonder of families.  Each year the show changes which introduces a new theme and different performers.  Having experienced The Big Apple Circus before, I was already familiar with several items that make this a worthwhile experience for the entire family.

Every member of the audience is within fifty feet of the performance which translates into a great view of the live action.  Twice we have been utterly thrilled with our seats which enabled us to see the details of the costumes to the gravity defying acts.  The clowns are friendly which means that there will be no nightmares as the two clowns, Joel Jeske and Brent McBeth, interwoven throughout the performance invite the audience to be engaged with the show.  There are plenty of performances which will leave you laughing, mesmerized, or sitting at the edge of your seat with anticipation. Having known all these facts and being a fan of The Big Apple Circus, I loved the new offering for 2015-16 which is The Grand Tour.  This year’s performances brings the audience back to the roaring 1920’s when traveling the world and exposure to new lands and cultures had been born through planes, trains, and automobiles.  As guests of the Big Apple Circus, we visited England, Arabia, Africa and back to New York through the visual display and story.  The diversity of acrobatic feats and performances encourage children to discover a love of imagination, travel, and diversity. 3 Conversations at the Grand Tour

The Grand Tour conceptually takes the audience on a trip around the world to view performers from unique locations.  I love that the Big Apple Circus encourages the audience to imagine themselves on different means of transportation that were becoming popular in the 1920’s such as a train or plane.  As the clown approaches the ringmaster, John Kennedy Kane, wearing a train costume, we hear the sounds and think that we are traveling on a train to a new location.  The opportunity to pull out the world map and trace the steps that the Big Apple Circus took on this trip can open the door to wonderful conversations about transportation and the history of the 1920’s. I love how the Big Apple Circus brought us around the world because I found this encouraged families to have conversations.  Within a short period of time, your children will see performers who appear and perform very differently.  Children will be hypnotized by the closing act of the Dosov Troupe from Belarus as they are catapulted into the air even as they wear stilts.  The Zuma Zuma African Acrobats will impress everyone as not only they jump in the air but collaborate by catching each other and balancing themselves using each other’s strength and coordination. The Energy Balancers from China are a trio of three men that will surprise you as they complete several balancing acrobatic acts that certainly left our audience in silenced awe.  The Big Apple Circus has been bringing talents from around the world to perform in Bridgewater for decades which enables parents to discuss different countries, customs, and cultures. As Chiara Anastini balances one hula hoop I am impressed, but when she tackles 50 hula hoops I am stunned.  However, Chiara has been performing for a long period of time just like Jenny Vidbel who has been training animals since she was 12.  Jenny will be a favorite for the youngest children and anyone who loves animals as she has the most adorable performance with several dogs leaping through the air.  She returns in the second half with horses completing tricks that had us captivated. These individuals have trained for years and in some cases decades which is a fabulous conversation to have about practice.  Our children are attempting reading, sports, and new skills every day and it will take time, patience and practice. The Grand Tour runs 1 hour and 50 minutes with a 20 minute intermission which moves at a perfect tempo for families with young children.  Immediately, we were greeted warmly by the staff at Big Apple Circus as we entered the big tent.  Everyone has a front row view of the hypnotizing acts which coupled with a carefully designed show, the entire family will be entertained.  Whether it is an act like the clowns that kept everyone laughing, to the “ohs” at the adorable acts of the dogs and horses, or the enraptured silence as we watched the Dosov Troupe as they flew through the air, you will have a grand time at The Grand Tour. In full disclosure, we received tickets to the show in exchange for our honest review.