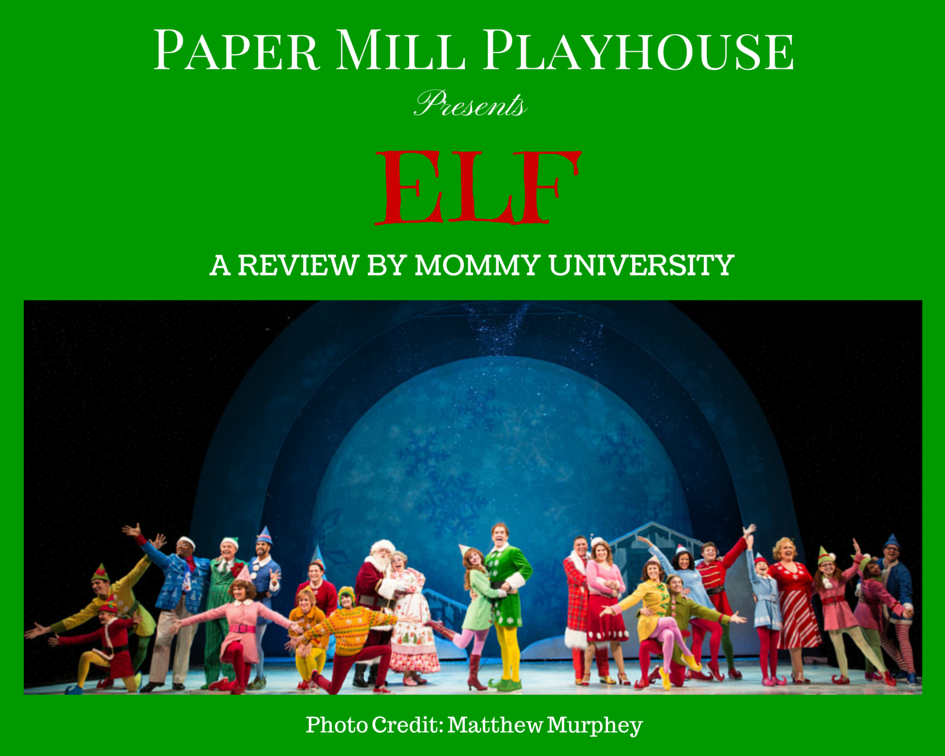 In full disclosure, I received 2 tickets to see Elf in exchange for my honest review.

The movie Elf has been a family holiday movie tradition in my house since my kids were born. Okay, I will be honest, since BEFORE my kids were born. It is one of my favorite Christmas movies, and I can practically recite every line. So when I saw that Elf was playing at Paper Mill Playhouse, I knew we had to see it!

Elf at Paper Mill Playhouse is based on this beloved film. This amazing stage adaptation is a holiday musical the entire family will enjoy! Audience members are taken on an exciting and heart warming journey with Buddy the Elf as he travels from the North Pole to New York City in search of his dad. We follow Buddy as he teaches everyone about the true meaning of Christmas!

When my son and I entered the Paper Mill Playhouse, we could feel the excitement in the air. Families, press and theatre goers from all over, sat at the edge of their seats as they waited for this much anticipated show to begin. The show opened with a comedic performance by none other than Santa himself! He immediately engaged the audience with humor both children and adults could appreciate. Paul C. Vogt was the perfect choice to play Santa as he brought the perfect amount of wit and charm to this role.

From the moment the show started, my son and I did not stop smiling and laughing. I loved seeing the happiness in his face and excitement in his eyes. Even though he is only 5 years old, he really has an appreciation for theatre. He loves the music, dancing, acting, costumes and set designs. He becomes fully engaged in each performance we attend, and Elf was no exception. He danced in his seat from start to finish.

The excitement started in the first act for us. During one of the first scenes, Buddy threw a snowball into the audience which my son was able to get after it rolled under his seat. He was so happy and proud of the snowball. He made sure it was safe the entire performance then fell asleep with it in his hand on the car ride home. It is a souvenir he will treasure forever. 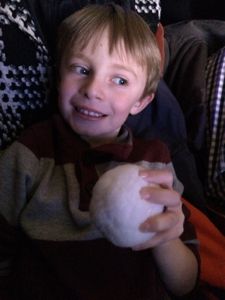 Tyler was so excited that he was able take home a snowball from Buddy!

James Moye, a NJ resident and Broadway performer, really brought the character of Buddy to life. He provided a fun spin on this beloved character that you couldn’t help but fall in love with. He was full of true Christmas spirit, happiness and joy. The interactions between Buddy and his new family were also a pleasure to watch. I enjoyed seeing the love emerge between two long-lost brothers as well as the respect grow between Buddy and his stepmom.

It was also a pleasure to watch the relationship grow between Buddy and his father, played by Robert Cuccioli. In true holiday spirit, we witnessed the cynical, workaholic dad begin to understand the true meaning of family, love and Christmas. Audience members also find themselves rooting for the budding relationship between Buddy and Jovie. Kate Fahrner did a wonderful job capturing the essence of this character with her wit and humor.

There were so many things to love about this wonderful holiday show! The music made us dance in our seats while the singing was inspiring. The set design was a gorgeous and whimsical display of not only the North Pole but New York City as well. Paper Mill Playhouse did a wonderful job depicting the essence of the holidays in New York from the lights and beauty to the hustle and bustle of hurried shoppers and locals on their cell phones.

The costumes were perfect from Buddy’s Elf outfit to even the simplicity but beauty of the outfits of Mr. Hobbs’ employees. We can’t forget the exciting and intricate choreography either! As a dancer and choreographer, I really appreciated each dance sequence, especially the tap numbers! Elf is jam-packed with talent in all facets of musical theater!

We know Elf is great for adults, but why is it great for kids?

Bringing kids to the theatre has so many amazing benefits. They learn an appreciation for the arts which can sometimes be forgotten when there is often so much focus on math, science and sports. Attending performances also helps children learn, model and practice appropriate social behavior. They learn when it is okay to clap or get out of their seat and when they should remain quiet or stay seated. Elf provided me with the opportunity to explain to my son that it was okay to clap, sing and dance in his seat, but it was not appropriate to stand up or raise his arms up or move them about.

Elf also offers something extra special for kids, the spirit of Christmas. My son loved seeing Santa, the Elves and all the gorgeous decorations. He still has the wonder in his eyes and belief in his heart so he was a big supporter of Buddy and his pursuit to get everyone to believe in Santa. The story also has a wonderful message about the importance of family and spending time together. I was very lucky as a mom to be able to see this show with my son!

You will love seeing the sparkle in your kids’ eyes when they see Santa! Photo Credit: Jerry Dalia

Elf at Paper Mill Playhouse can be seen eight times a week from now until January 4, 2015. Shows take place on Wednesdays and Fridays at 7pm, and Thursdays, Saturdays and Sundays at 1:30pm and 7pm. Check the Paper Mill Playhouse website for special holiday schedules. Ticket prices range from $28-$99.

There are also FREE audience enrichment activities families can enjoy. On Thursday December 4, 11, 18 and January 1 at 6pm families can participate in the Conversation Club where you can learn more about the show from members of the Paper Mill’s Artistic and Education Departments. On December 20th, following the matinée, there will be a Q & A with the cast.

**Paper Mill Playhouse will be offering a special autism-friendly performance of Elf on Tuesday, December 23, 2014 at 1:30pm.