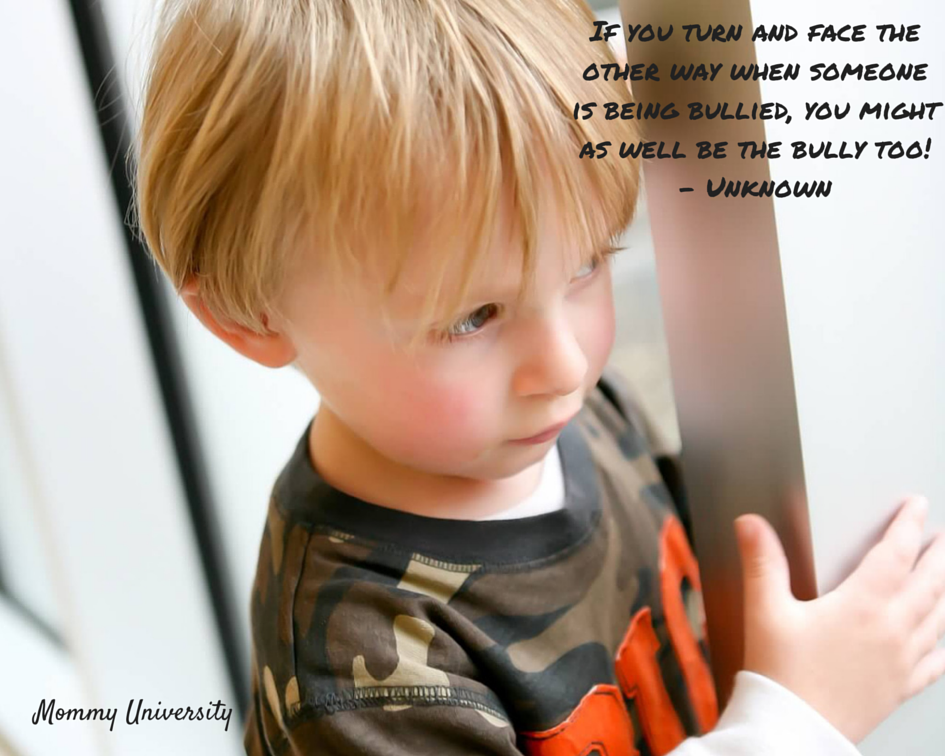 Did the coach just say that? After weeks of teaching my son how to handle a bully, he says that?

So my son is a small kid, always has been. I have always been worried that he would get picked on in school. He is sensitive and easily frustrated but he is also quirky and silly. He has a kind heart and would never intentionally hurt someone (well besides getting mad at his brother after he knocks over all his Legos).

Since starting soccer this season, I have witnessed my son being picked on and bullied by kids much bigger than him. They knock off his hat and kick his ball away. Luckily, he does not even realize how cruel this really is. Is my son perfect? Of course not! Can he be annoying and get in kids’ faces? Yes, he’s five! But is he malicious? No way!!

How did I help my son when I really just wanted to tell off the kid that was picking on him?

Next, I told him to never let anyone treat him badly or hit him or put him down. I did NOT tell him to hit or yell back (even though I wanted to). I told him to use his words and say one of the following:

After using his words, I told him to tell his coach (or teacher in school) what happened. Do I want my son to report every little thing? Of course not! But I want him to stand up for himself and be safe!

I have been watching my son use the techniques I taught him. It has made me very proud. However, I have also watched as he was ignored when he told the coach he was pushed. I sat in the bleachers in disbelief when no one noticed the big kids kicking the ball right out from under him.

So what did the coach say tonight? So when someone was grabbing my son’s hat and bothering him, he told the coach. So what did he say? “Oh don’t be a tattle tale!” What? Seriously? Not the lesson to teach kids! Not only did his face drop, he was embarrassed in front of his peers. It took everything in me not to storm the field!

What did I learn from this situation?

I learned that not everyone has had a lesson in bullying. Not every person has experienced bullying and understands its impact. Not everyone knows what to say to a 5 year old!

What should we all learn from this teachable moment?

We need to realize that everyone needs training in bullying, especially those that work so closely with our children. I don’t care if you are a volunteer or get paid $100/hr, you should be aware of how to stop bullying and help a child who is being bullied.

We also need to learn to look out for one another and one another’s children. If you see another child being bullied, or even that bully is your own child, say something! “It takes a village…” Isn’t that the saying? Let’s get back to helping each other and standing up for what is right. Let’s also keep teaching our children the difference between right and wrong and how to defend themselves using their words, not their fists.

So, for now, I will continue to teach my son how to cope with bullies and how to grow up to be a strong, courageous, confident and independent young man!