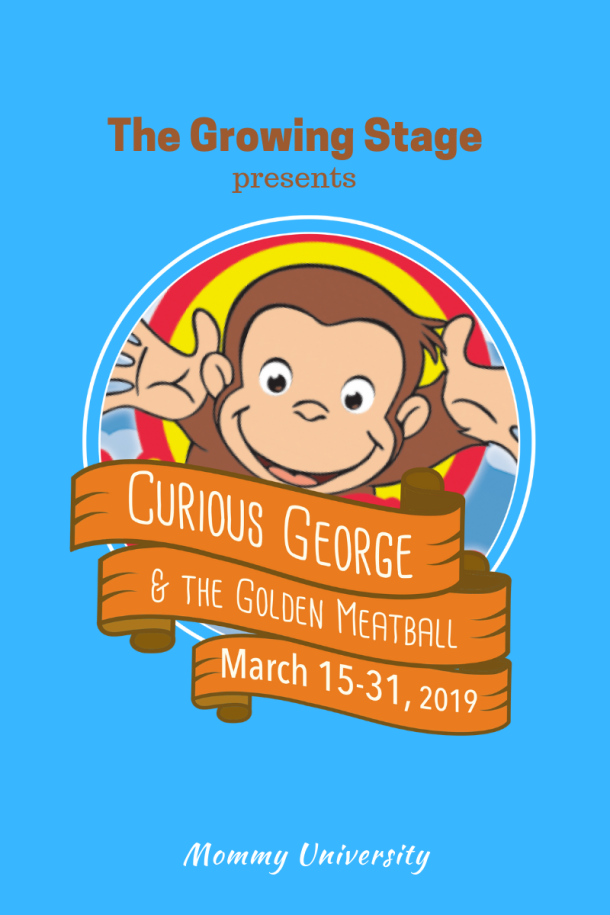 “You never do know what’s around the bend,

a big adventure or a brand new friend, when you’re curious like Curious George!” Curious George has been an icon in children’s literature since he hit the bookshelves in the mid-twentieth century. I grew up following him along his journeys. This inquisitive character shares the message that the world is a better place when you approach life with an open mind and heart. Watching my children become engaged by this kind soul while learning about the simple joys in life reminded me of my childhood. Obviously when The Growing Stage released their 2018-19 lineup, I was thrilled to find out that Curious George would be included. The Growing Stage creates animated, lively, and fun performances that are the perfect introduction for little ones to fall in love with theatre.

Curious George The Golden Meatball begins with the main character on the day he is helping his close friend Chef Pisghetti serve food during the largest event of the year. Unfortunately, Chef is heartbroken when no one comes to his restaurant to eat his homemade meatballs. After some investigating by George, he learns that the crowds are fascinated with an invention by Phinneas T. Lightspeed which quickly dispenses meatballs at a rapid pace. Chef gives up on cooking which inspires George to submit the Chef’s famous meatballs in a competition called the Golden Meatball hosted in Rome, Italy. However, how George gets to Italy and what he does when he arrives reflects the classic antics of Curious George. With support from the Man in the Yellow Hat as well as the Doorman, a fun adventure ensues that teaches young audiences the importance of friendship as well as putting your heart into what you do. The Curious George production was directed by Danny Campos who infuses light-hearted humor that will even make the adults in the audience laugh. If you have watched the television show, you will be amazed how Sara Giacomini strikes a similar chord. She possesses the wide-eyed innocent look that is a trademark of George as well as making similar vocal sounds. Will Brockman brings The Man in the Yellow Hat to Netcong with that calm and supportive voice that is needed to guide a precocious George. Davis Cameron Lemley is first seen as a Carpenter in the performance but when he throws on the cooking hat, he is an absolute treasure as Chef Pisghetti.

With his splits and flips, Gregory Banks is an enthusiastic highlight as Phinneas T. Lightspeed. In fact, the Choreographer, Jillian Petrie, must feel proud as the dance scenes were impressive and entertaining! Rounding out the rest of the cast is Melody Lieberman as the Doorman and Jenna Morris as Netti. Most of the cast played two or even three roles without missing a beat. They looked like they were having fun, and by watching the young children in the audience, it was apparent they were as well. The Growing Stage selects productions which are family friendly, and part of its charm is that at the end of the show, audience members can meet the performers. Watching young minds grasping the Activity Guide in their hands (which contains an Autograph Page) and talking to the individuals who bring magic to the stage, reinforces the importance of the arts. Curious George The Golden Meatball runs through March 31 at The Growing Stage so don’t miss your chance to see this amazing production! To learn more and purchase tickets, please visit their website.