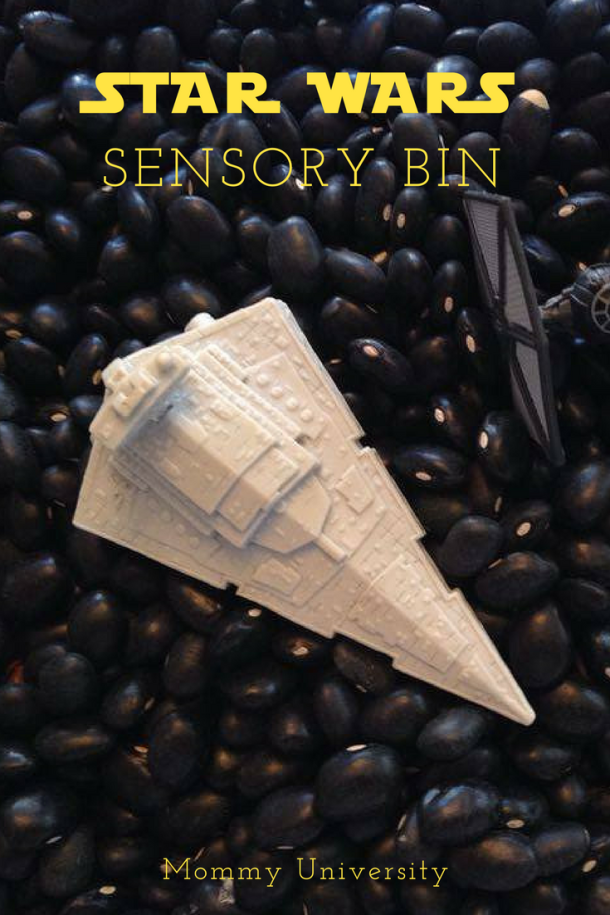 This is the sensory bin that Star Wars fans have been waiting for!

In our household Star Wars has a level of mystique quality which is no surprise since we had a “May the Fourth Be With You party.” When the new Star Wars toys were released in the store, my family took a trip to the store to check out the cool new items. As my son carried the miniature version of the Millennium Falcon around the store for the entire trip, I began to formulate how the Hasbro Micro Machines could be used in a sensory bin.

Sensory Bins invite children to receive tactile feedback that provides their bodies with information, but they also help develop their understanding of weight and balance. In this particular case, the sensory bin has an imaginary play element. What I found is that both of my children were fascinated with the Star Wars Sensory Bin. They would imagine their own stories and battle scenes in outer space which, as a parent, I appreciate. My children are getting tactile feedback that they need and developing their language skills as well as their imagination. This popular activity will be brought out again and modified as we watch more of the Star Wars movies and shows. An invitation to play for the young padawan in your family.

My son cannot decide if he thinks the Star Destroyer or the Millennium Falcon is the coolest!

Setting Up the Sensory Bin

Place the black beans and the Micro Machines in the large container. If your children enjoy Star Wars they will begin playing with the various ships right away. My son’s current obsession is the Star Destroyer which is what received his attention the most. The sensory bin becomes a little playground as the black beans resemble outer space, and the tactile component inspires kids to play. However, as my children began to lose interest, I added a new element which was providing them with tongs and a cup. They would grab the various ships using their tongs and this became a fun new game for them. The tongs are great to help them improve their fine motor skills as well as spatial awareness. Adding the tongs became challenging yet fun for this little Jedi.

As we count down to the release of The Force Awakens, Star Wars fever has been increasing. My children have been having a blast playing with the various toys available on the market; however, at Mommy University we always look at different ways we can use toys. The Hasbro Micro Machines were perfect for this activity as my son now has the perfect tactile backdrop for all the stories he imagines taking place with his favorite ships: the Millennium Falcon and the Star Destroyer.

Which ship is your favorite in Star Wars?