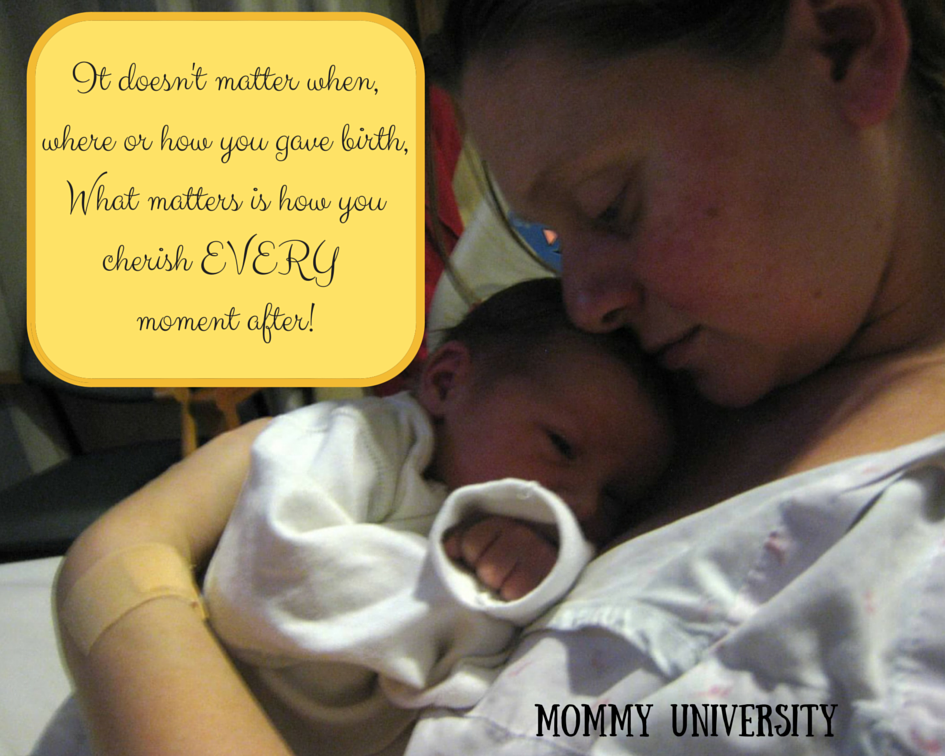 For many people having a C-Section makes them feel like less of a woman or worse yet, less of a mom. I empathize with this feeling but I wholeheartedly do not agree! Although I didn’t plan on a Cesarean birth with my first child, I was completely okay when it had to happen.

Here is my story:

I had always been terrified of giving birth. I mean really, how the heck does the baby come out of “down there”? I wasn’t sure if I was strong enough to get through the experience. I attended the birthing classes, watched the videos and spoke to friends. I knew I had to do it when the time came, but I was petrified of the unknown!

My mom told me that birth was easy for her, and my grandmother’s stories were even better. Her last labor was only 45 minutes. This made me think, it’s in the genes. I got this!! I did NOT have this!

I went into labor on a Saturday night around 9pm. My friend was staying with me as my husband was working late. Who knew that spicy food really does help induce labor? My friend kept a record of my contractions until the hubs came home then he took over. By the morning, I was about 4-5 minutes apart so we happily headed to the hospital. I was admitted, attached to an annoying IV and examined by a nurse who in NO WAY prepared me for the pain I was about to endure when she shoved her hand up my only 1 centimeter dilated cervix! Holy crap!

I denied drugs thinking I would wait until it got worse. After several hours, I only dilated another half-inch so, wait for it….they sent me home! I was devastated. I was clearly in labor but according to them not in “enough pain” and not progressing. I left the hospital depressed and starving. Of course I didn’t eat that morning because I had a huge fear of pooping on the table while giving birth. I was so mad I made my husband go to Dairy Queen and I got a big strawberry sundae.

That night I sat on the couch with my ENTIRE family staring at me waiting for each new contraction. I was in so much pain but it’s kind of hard to show it when you have so many people watching your every move. Once everyone went to bed the real fun started. I tried everything to relieve the pain: warm bath, heating pad, walking, tea, watching television. Nothing worked! When I fell on the floor off the toilet and could not get up, I figured it was time to return to the hospital. When I called my doctor to say I was going, she said, “Oh I thought you would have called sooner.” Seriously?!

I tried to be strong but the pain was unreal. I cried, yelled, cursed. I quickly said “yes” to an epidural, and I was in so much pain that I don’t even remember the giant needle they shoved in my back! So after all that time, guess how many centimeters I was dilated? 2..that’s it..just 2! So pitocin it was. So now I am 30 hours into labor and still only 2 centimeters dilated.

Over the next 8-9 hours, I was on and off oxygen, rolled from side to side to relieve pressure and help the baby’s heart rate, stared at by family and doctors, and I still only progressed to 4 cm. What the hell? Why did this baby not want to come out? Was it my subconscious keeping me “shut” due to my fear of vaginal delivery? Was the doctor doing something wrong? Was there something wrong with me? After about 40 hours of labor, I finally said to a nurse, “Look, I am not one of those women who will freak out if I don’t deliver naturally!”

The nurse returned in 3 minutes and said they decided to do a C-section. Finally, I was going to meet my baby boy. I asked when? She said, “Now.” Wait…my mom’s not here, my sister’s not here. This is really happening..NOW! I was prepped then rolled out of my warm dimly lit room into a hallway and then into a cold and bright operating room. I was laid out on a bed with a giant blue sheet/tarp like thing hung in front of me so I was unable to see what was about to happen. My arms were stretched out to either side. It was an experience I was definitely not prepared for nor ever expected to happen. But here I was, trying to stay calm during a crazy situation.

There were random people staring at me while I laid on the table half-naked. I have never felt more vulnerable and embarrassed in my life. I was so exhausted, however, that I didn’t even have the energy to focus on fear or confusion. I just wanted to meet my baby! My husband was ready with the camera, I felt a pull and a tug then…a cry!

My baby boy was finally here! My husband got an amazing first picture! Some may say it’s graphic but I LOVE it! My angel was brought to me, and I kissed his perfect face. He was then whisked away along with my husband for the usual post delivery rituals.

I did it! It may not have been the old fashioned way, but I did it! I made a perfect happy and healthy baby boy!

So what’s the moral to my story?

Be prepared for anything! It’s wonderful to have a birth plan but be prepared for the possibility of an alternate route. Try not to get caught up in the disappointment and take in every moment.  I had a C-section, and I am no less of a mom than a woman who delivered naturally. That may not be the path I chose, but it is the path I was given. I have not only accepted it, but embraced it. I feel like it has even made me a stronger woman!