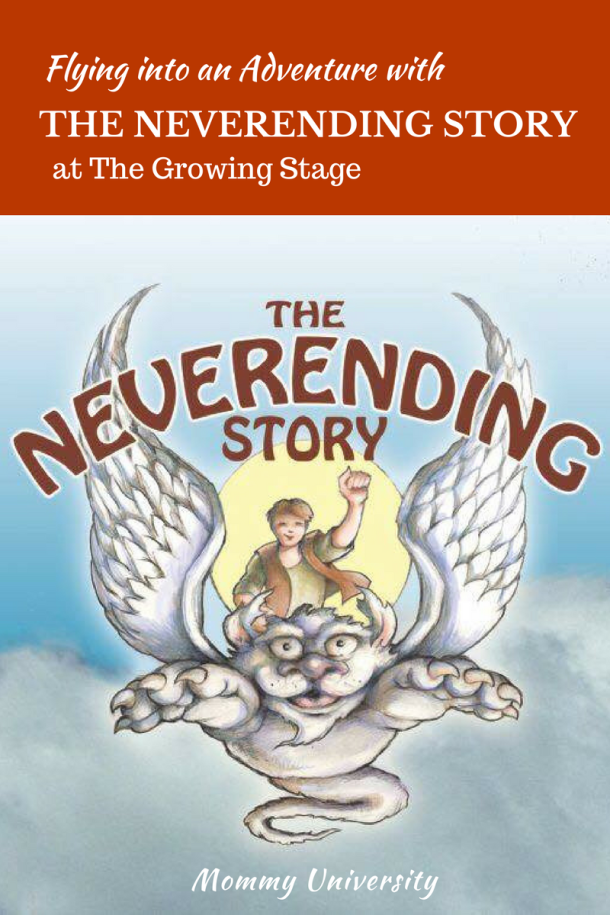 It was an honor to be invited to the opening weekend of The Neverending Story at The Growing Stage in Newton, NJ. We are very proud to partner with this amazing organization that brings the love of the performing arts to individuals of all ages.

It is always a pleasure to attend a show at The Growing Stage. For 35 years, this powerhouse of family theater has been bringing quality productions to life and exposing hundreds of children to the magic of the performing arts. As a child, I would watch The Neverending Story dreaming of taking a ride with Falkor the Luck Dragon. I never knew this was transformed into a play until now.

Published in 1979, The Neverending Story by Michael Ende gained massive worldwide popularity when it was transformed to a film in 1984. The story of Bastian Balthasar Bux, a young boy who is recovering from the death of his mother, feels isolated in a world that has bullies and a father who is coping with loss. Upon the encounter of a curmudgeon bookstore owner, he liberates a book called The Neverending Story. The book takes him on the adventure of Atreyu, the hunter, as he is enlisted by the Childlike Empress to save the world Fantastica from the Nothing. As the Nothing consumes Fantastica and its inhabitants, Atreyu encounters many characters along the way to help save their world. However, nothing is as powerful as the imagination of a child like Bastian. The book was transformed into a play by David S. Craig which is incredibly impressive when you have the creative talents of The Growing Stage. While my daughter is mesmerized by the theater, my son does not love every performance. Within a few minutes of Bastian taking the stage, I looked over to see my son smile. Sam Bloch who plays Bastian performs effortlessly making us feel the sadness, disbelief and wonder that this character experiences. When Atreyu, performed by Davian Arroyo, takes the stage I watched my son begin to sneak up the aisle so that he could see more. Atreyu is charismatic and engaging.  Davian’s performance was truly amazing. Another favorite performance was the interpretation of The Gnomics by Becky Nitka and Donald Danford. With perfect timing and the ability to play off of each other, they were thoroughly entertained. This ensemble piece is rounded out by Justin Watt who plays Falkor and Mark J. Quiles who portrays Gmork, an honestly scary werewolf. Many other performers take multiple roles managing props and other devices to make other iconic characters from the story. Another reason I think children will especially enjoy this show is for the sheer quantity of young actors that they will see leading wonderful performances. 3 Inspiring Themes in The Neverending Story

Every Book Holds an Adventure

At Mommy University, we promote reading to children every day. The Neverending Story demonstrates the power that reading provides children which is the ability to go on adventures and see different worlds through their imagination. Bastian suffered the loss of his mother, but found comfort in books when he couldn’t get that support from his grieving father. By reading books, Bastian discovered Fantastica, relationships and lessons that help him understand the world he lives in.

Bastian who is bullied by others in school, found support and friendship in the books he reads. He learns from the Childlike Empress, finds courage with Atreyu and discovers humor with The Gnomics. However, The Neverending Story also includes a wide range of diverse characters who also find unlikely respect and friendship. Confidence Comes from Within

During Atreyu’s journey to save Fantastica from the Nothing, he suffers the loss of Artax a character he has a deep bond and questions himself at several key moments. It is through Atreyu that Bastian notices he also has the confidence to be himself. The  Neverending Story is one of our favorite performances at The Growing Stage due to it’s stunning set designs, masterful acting of a large young cast, as well as the grande interpretation of the play. After the performance, my husband remarked the play is easier to understand than the movie for our childhood and I agree. For two hours we were no longer in New Jersey but traveling through Fantastica to be reminded the importance of imagination.