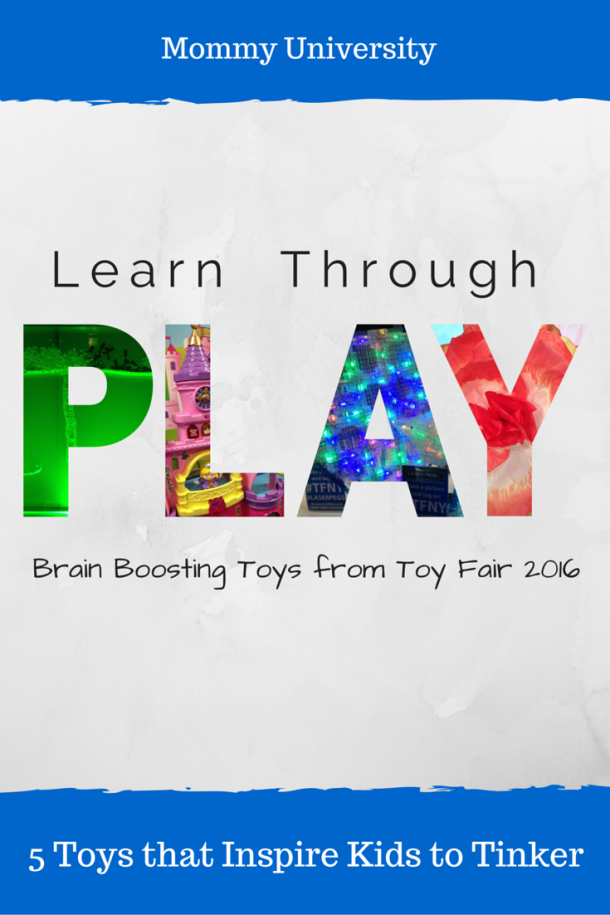 Tinkering is the act of modifying, improving, or enhancing an object.  It is an open-ended process without a specific product but eventually as children develop critical thinking skills they can become future inventors and innovators.

Toy companies have realized the fun and improvement in skills associated with tinkering which is why we have seen a surge in these types of toys hitting the market this year.  Children will be challenged to think outside the box and improve gross motor skills as well as think about the world with a creative lens.  At Toy Fair 2016, we saw tinkering take front stage through various toys that appeal to young developing minds.  Here is a list of some of our favorite collections and toys.

5 Toys that Inspire Kids to Tinker

Collaborations often times can yield amazing outcomes such as when the Smithsonian and Creativity for Kids partnered to create Spark Lab.  Children are invited to invent their own games and money as well as making their own robots.  There are seven options that will challenge your child to become an innovator. The combination of a building toy with lights, encourages kids to make their own innovations with Laser Pegs.  At the foundation is a power base that will light up the Laser Peg pieces once they are connected. From trucks to helicopters to a motorized car and tank, Laser Pegs invite children to build, create, and tinker with endless number of kits. The imagination to create one’s own Tie Fighter.

Magformers is a favorite building toy as colorful geometric shapes snap together by magnetic pieces; however, they have recently launched the Hitech Robot.  Now children can build their own robot which walks.  This is a phenomenal toy that encourages STEAM (Science, Technology, Engineering, Art and Math) skills to another level. The Geek & Co collection of kits have traditionally focused on crafting which is part of the tinkering movement which is a throwback to handmade products and thinking outside the box.  The Sew Circuits kit overlaps with crafting and electronics as children can first create a felt robot by sewing and then afterwards include a light which the child then connects. While K’nex has many brands that invite children to tinker, they have released additions to their popular collection of Tinker Toy which promotes children 3 and older to design their own creations.  Conceptually this is a straight forward building toy that focuses on the idea that when it snaps together, it stays together. Safari Ltd. has amazing realistic figurines but with a little ingenuity your children can use them as a focal point in a snow globe or DIY aquarium.  As well, you can take one of their dinosaur figurines and convert it into a toothbrush holder to inspire your reluctant preschooler to brush their teeth. I hope this post has inspired you to tinker!

This is not a sponsored post. We believe is learning is achieved through play and we love toys.