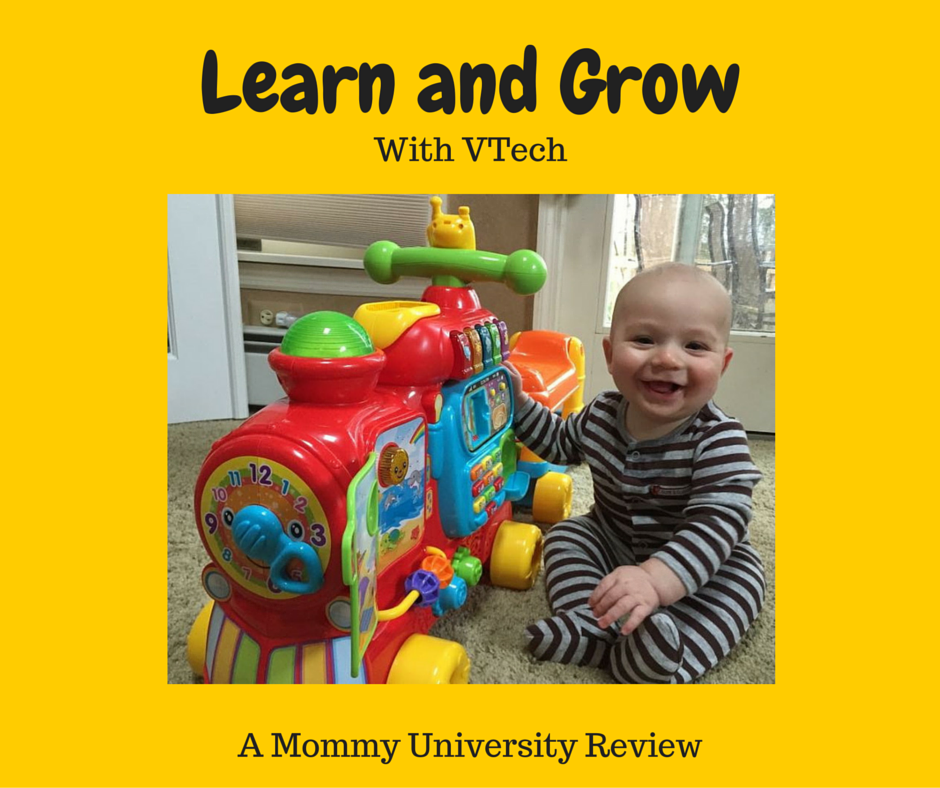 I was so excited to receive the Sit-to-Stand Ultimate Alphabet Train from VTech to give to my son this past Christmas. With so many manipulatives to help build developmental skills, this was the perfect gift for my little one. What I like best about the VTech Alphabet Train is that it is designed to grow with my child. I know that he will get a few years out of this toy before he outgrows it, which I find is such a bonus.

The suggested age range is 12-36 months, but my 5 month old absolutely loves his train and gets so excited when the lights and music start playing. As he gets a little older, I’m thrilled that not only will he be playing, but also learning and developing skills at the same time.

The VTech train enhances sensory development in so many ways. As the buttons are pushed, various songs are played that help reinforce learning. My son is at the floor play stage, which is the first stage of playing with his train. His eyes light up as the train sings about the different colors all while flashing the same colored lights. The 100+ songs make children want to engage with this toy in such a way that they don’t even know they are learning! My son absolutely loves the bright lights and the train certainly attracts his attention. I love how realistic the VTech Train sounds when my son pushes the buttons. From songs to counting to train whistles, there are so many sounds and melodies to keep children engaged for extended periods of time. My son giggles with delight as the train sings him songs, and I can only wonder what his imagination is thinking of while he’s playing. Even though my son can’t talk yet, I can tell that he’s really listening to the letters, numbers, and animals that the train sings about. The constant reinforcement of words will help him develop his language and connect the letters that he sees with the pictures on the blocks. I really like that the letter blocks are double-sided for a few reasons. The first being, it saves space! All the letters are stored in the seat of the train so it makes for very east clean up. Another reason is that when my son gets a little bit older, he will actually have to “look” for the objects that the train is asking for. Basically it comes down to, more fun! Again, my son is a bit too young to be able to do some of these things yet, but gross motor skills are probably my favorite part about the VTech Train. Once my son can walk he will be able to push his train and ride it as well! While my son may think he’s having an exciting time on the train, I know that he’s actually developing more toned muscles, coordination, and balance.

This is probably the area that my son is getting the most out of when it comes to the VTech Train. The letter pieces are small enough to develop hand eye coordination, but not small enough that he can’t choke on them, even at 5 months. My son loves taking the blocks and putting them in the chute at the top that lets the pieces fall into the caboose seat. Once he gets a little older he will enjoy putting the blocks in the “secret” insert on the train. The train asks for certain letters, animals, and objects, and it is the child’s job to find them and give them to the train. While those are the major items the train has to offer, it still offers much much more. The front of the train has a clock that the child can spin around to learn how to tell time, and the side of the train has a story book with interactive pages. The walkie-talkie is a neat piece that can be used as the train’s horn (I know, so cool!). The caboose can be used as a seat or converted into a wagon for the child to pull around the house and collect toys, (I fully intend to use this to teach “clean up skills” in my house).

From learning to walk to learning colors to building vocabulary, I can’t wait to watch my son do it all, and if the VTech Sit-to-Stand Ultimate Alphabet Train helps him get there along the way, even better! You can purchase your own VTech Alphabet Train for $60 using our amazon affiliate link. *We were provided the VTech Alphabet Train as part of our holiday gift guide. All opinions are completely original.

10 Benefits of Pretend and Imaginary Play