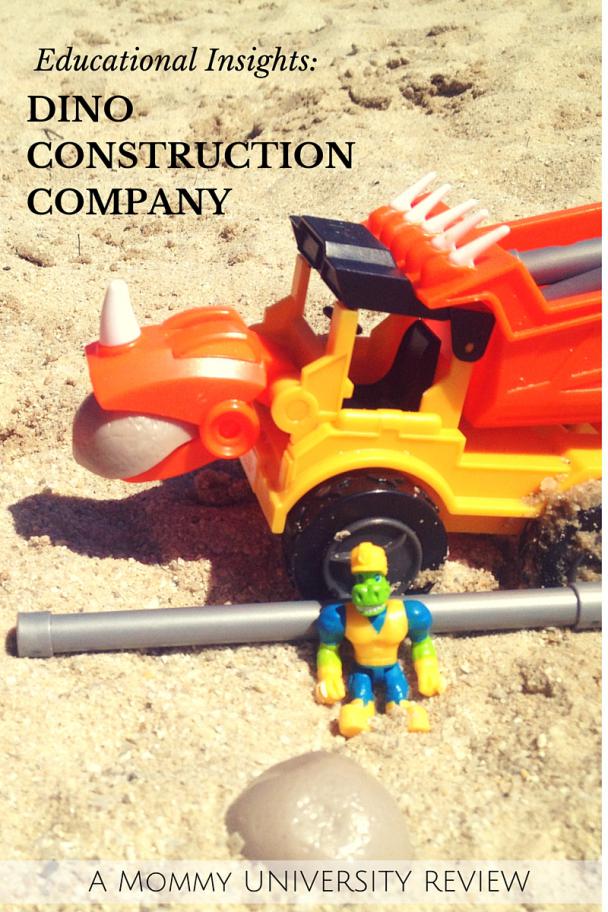 Mommy University received Dino Construction Rocko the Styracousaurus Dump Truck and Dino Construction Company Build and Smash Set from Educational Insights as part of the EI program.  A review is not required, however, we love reviewing products we feel have educational benefits.

Kids love playing with toy dinosaurs. They also love playing with construction vehicles. So why not combine the two to create an entirely new way to play? Although this may sound a little strange, this merger makes absolute sense when you think about children and their interests. Educational Insights has combined these two play interests to create the fun and exciting Dino Construction Company line of toys.

As an EI Insider, we had the pleasure of reviewing Rocko the Styracousaurus Dump Truck (which comes with a dino-man figurine) and the Dino Construction Company (DCC) Build and Smash Set which includes three break apart boulders, six short and long pipes, a dino-man figurine, two barriers and two drum barriers.  While Rocko the Dump Truck can be purchased as a standalone toy, I feel that DCC Build and Smash Set works best when it accompanies another Dino Construction Company vehicle. The Dino Construction Company consists of a variety of dinosaur vehicles as well as the Smash and Build Set.

Since Dino Construction Company was a hit in our household, I wanted to share some of the brain boosting activities my children completed while playing with these toys.

Typically, when we think of a dinosaur sensory bin we imagine some dinosaur toys or fossils hidden in sand.  With the Dino Construction vehicles, however, children can use the vehicles to dig up rocks, move sand and scoop up fossils. To create the bin, just add sand and/or rocks to a plastic bin then add your Dino Construction vehicles. You can also use your sandbox to create this play experience. The Dino Construction Company set is great to play with in a sensory bin or to bring to the beach.

The Build and Smash Set comes with six short and long pipes; however, they do not connect with each other. What we discovered is that you can use play doh to adhere the pipes together.  This was a fun way to use problem solving and visual skills. It was also an introduction to architectural concepts. By adding other toys you can also enhance the fun and learning!

With the long and short pipes, children can make shapes such as squares, rectangles and stars. The first thing my son did with the pipes, however, was create letters.  We began to have fun challenging him by calling out letters for him to make.  It was a fun lesson in letter recognition and spatial-organization. How many letters can you make? We had fun making letters out of the pipes.

We brought the DCC Build and Smash Set and Rocko to the beach with friends and quickly my son’s friend played with this set.  He began to set up different scenarios and stories behind the actions he was completing with the toys. It was fun listening to them create their own imaginary worlds full of adventure and excitement.

Explore Cause and Effect

By playing with the Build and Smash Set children will attempt to build.  By piling up the pipes, they will observe and instigate cause and effect.  When the boulders fall down or Rocko empties his bed, they will create their own experiments which gives them a better understanding of the world. How many pipes can he fit in Rocko the Dump Truck? Kids enjoy exploring this toy with so many possibilities for cause and effect.

The Dino Construction Company collection is impressive with a Triceratops Bulldozer, Ankylosaurus Steam Roller, T. Rex Skid Loader, Brachiosauras Backhoe, Stegosaurus Cement Mixer and more.  Each can be purchased on Amazon using our affiliate link provided.  The Build and Smash Construction Set can also be purchased on amazon for under $12!

Explore and Discover Nature with GeoSafari’s Jr.’s BugOpticals and Periscope