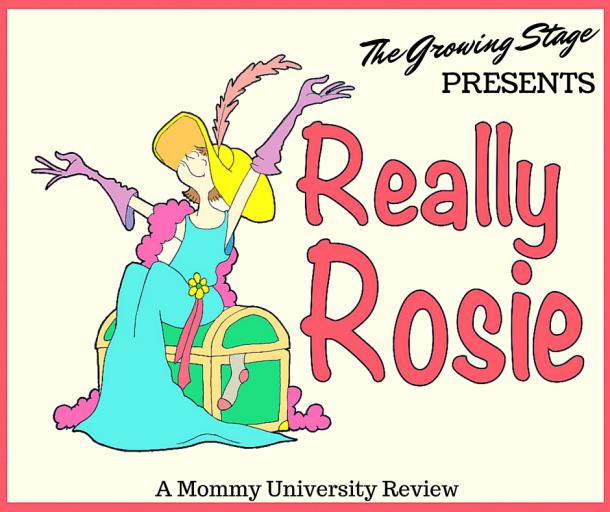 In full disclosure, we were provided tickets to this production in exchange for our honest review.

As I watched my daughter dancing in her seat as the cast sang “Alligators All Around”, I wish I could have grabbed a photo because the look on her face was a combination of entranced, animated and enthused.  She was thrilled to return to The Growing Stage, the Children’s Theater of NJ, for their opening night of Really Rosie. This young critic loved the performance and was singing along to the songs.

Really Rosie is inspired by several stories written by Maurice Sendak who is most known as the author of “Where the Wild Things Are.”  The show is filled with the music of Carole King who is well-known as the songwriter of famous songs such as “You Make Me Feel Like A Natural Woman” and “You’ve Got a Friend.”  This unique combination of artistic mavericks created this show which is about a sassy, young dreamer that imagines every moment as a film.

Rosie, who lives on Avenue P, is constantly enlisting her friends (The Nutshell Gang) to help act out different movie productions including producing a movie about her life.  Each character presents a storyline to include which is accented with a song and based on their unique personalities.  Really Rosie takes place over a day in their neighborhood highlighting each child’s imagination accompanied by music and dancing.

The show is led by Rosie, played by Kayla O’Brien, who does a phenomenal job belting out songs throughout the production.  Nick Porfito, who plays the bookish Johnny, is a contrasting personality to the “don’t care” apathetic Pierre yet both provide wonderful comic relief.  In fact, Sasha Nelson as Alligator and Lauren Hertzig as Kathy also offer perfectly timed humor as well.

The chemistry of the characters is apparent as the rhythm of the singing was synchronized and the punch lines were delivered without missing a beat. Really Rosie may be accused of “overstimulating” Johnny’s imagination, but she gave me several thoughts while watching the play.

Being Different is Good

Each character in Really Rosie is strikingly different from each other in appearance, personality, and values yet each day they play with each other.  While Rosie may be the most expressive and dramatic in the group, we see interesting relationships form.  From Johnny’s reliance on various types of books to Pierre’s apathy towards Kathy’s need to be included, they collaborate each day to create a new production.  I have always been one that enjoys surrounding myself with individuals as well as learning and growing with them which is why I appreciate how these characters maintain their unique personalities.

Stay True to Who You Are

Although Really Rosie is the driving character proposing filming movies everyday on Avenue P, each character proposes their own ideas as well.  What I genuinely enjoyed is that each character remained true to themselves. I loved that their stories were contrived from these personalities.  Each character in this group makes a unique contribution which is its own beautiful message.

It is common practice to believe that you need the best material items to create a quality product, but the Nutshell gang in Really Rosie remind us that sometimes you just need an overactive imagination.  Children have an amazing ability to wear a green hat and imagine themselves as an alligator which is why complicated props are not needed to have fun. Really Rosie is playing at The Growing Stage from October 2 until October 18th!

Really Rosie will be running matinees Saturdays and Sundays at 4pm through October 18, 2015. Tickets are $15/children, $20/seniors and $25/adults on Saturday and Sunday. Friday performances are at 7:30pm and everyone is a child paying only $15 per ticket.  Seating is first come first serve, but every seat in the house provides an excellent view. The Growing Stage is a small theater making it perfect for children especially little ones who may need to get up once in a while. Make sure you stay and take pictures with the cast after the show too!