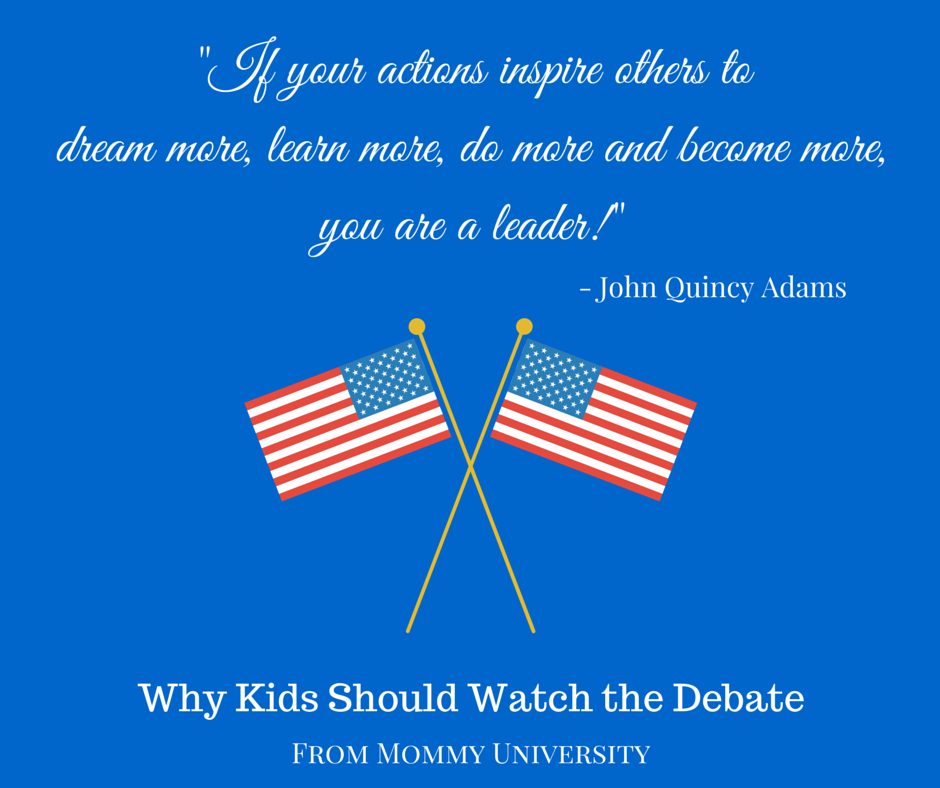 We all know it is important as an adult to be engaged and involved in the election process, but why is it important to get your kids involved as well?

You may feel that a debate is over your kids’ heads or it does not concern them. You may believe they will be bored and uninterested. Now this may be true to some degree, but the benefits far outweigh the cons in this situation. There are also many things you can do to make the event more interesting and engaging for your child.

Now, I feel like I must share that I am not a political person. I am ashamed to admit that I am not even registered to vote (don’t judge, I promise to register for this election). I don’t call myself a Democrat or Republican even though my family is very set in their beliefs. I have my own opinions and views about how I believe America should be run and look for a candidate that has the same beliefs. This article is not to express my personal beliefs, however. It is merely to show the importance of the political process and why kids should be involved. This article is to show how the debate is a teachable moment for the entire family!

Benefits of Kids Watching the Debate

Introduces Kids to the Political Process

No matter the age of your child, watching a debate will help kids understand the political process. For little ones, they can see that there are great men and women in the world that want to make America even better than it already is. Older children learn about the actual process of becoming a party nominee and a Presidential candidate. Kids also learn there are various steps in the political process, one being a debate.

Often times families watch television together in silence. Parents don’t engage their children in conversations about the show or movie they are watching (although this is very important in the child development process). A debate can help spark conversations between parents and children. Talk to your child about what they are seeing and hearing. Discuss their points of view and which leader they like the most and why.

For little ones, conversations can be as simple as using descriptive words. “Look how nice that man looks in that blue suit and red tie. What is your favorite outfit?” “Which person is the tallest on the stage?” These questions may seem silly, but they get kids engaged in the event. They also help develop language skills.

For older kids, ask them how they would answer a specific question. Tell them to pick their favorite leader and discuss why. Another fun way to spark conversation is have your own debate during commercials or at the end. Ask each other the same questions seen on television or make up your own. Either way, it gets families talking and engaging with each other.

While listening to the debate, kids begin to think more critically about our country and the world. They begin to problem solve themselves based on the questions and answers they hear. Kids are often shielded from the “real” world. Watching a debate allows children to understand what is happening and how they can be part of positive change in our country.

As kids watch the debate, they begin to become more aware of the serious issues our country and world are facing. They also begin to see their role in helping to create change. Kids often live within their own bubble consisting of One Direction and the Kardashians, but watching the debate opens their eyes to the world around them.

These are just some of the many reasons why your children should sit down with you tonight as you watch these historic debates. So pop some popcorn, grab a drink and get ready for a family night watching the debate!