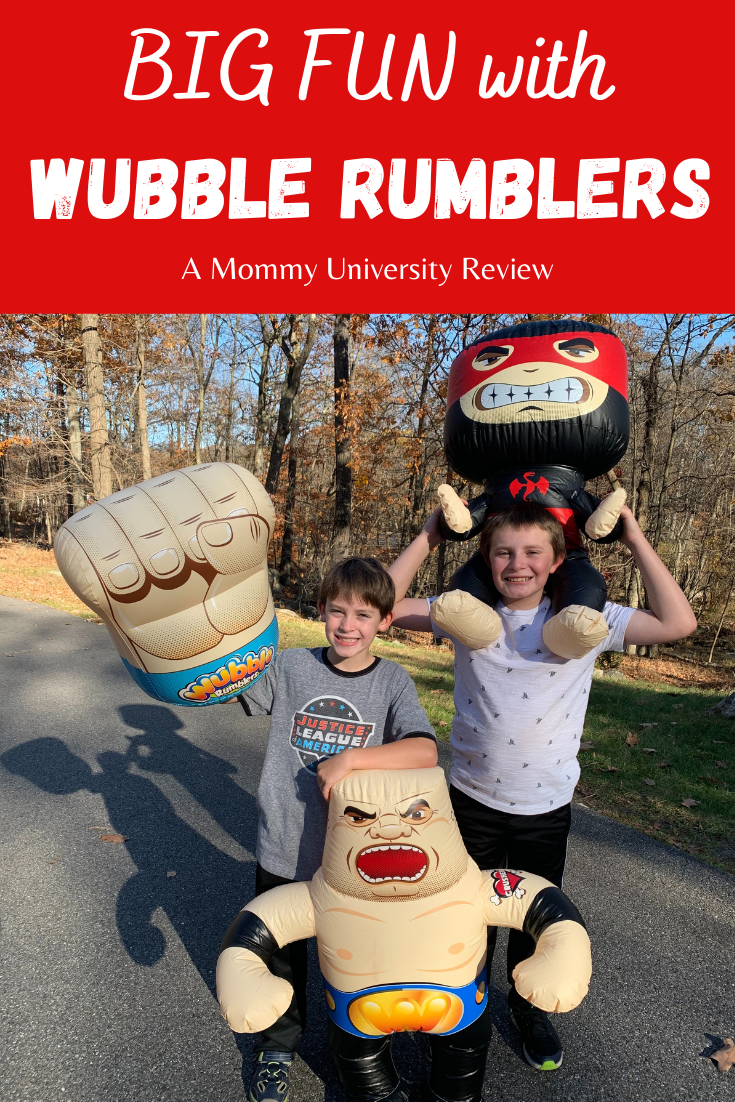 My boys absolutely LOVE the Wubble Ball so when I was asked to review the new Wubble Rumblers, I jumped at the chance. Just like the beloved Wubble Ball, the Rumblers offer hours of learning through play. NSI President Frank Landi developed the original Wubble Bubble Ball to keep children’s love for fun, active play alive. The design was inspired by his children’s wish for a real bubble to play with. Since the first Wubble Ball was released in 2014, there have been tons of new Wubble toys including the new Wubble Rumblers. Each Wubble toy inspires creativity and imagination! At 3 feet tall, Wubble Rumblers offer BIG fun for kids ages 6 and up. Available in 4 designs (Wrestler, Wrestler Fist, Ninja, and Karate Chop), Wubble Rumblers are 400 times more elastic than typical inflatable toys. Each one comes with its own pump and is easy to inflate. Within minutes, they are ready for action. Kids (and kids at heart) can punch, kick, throw and wrestle all day long. They are also lightweight making them perfect for indoor and outdoor play. As a parent, I love that they are soft yet durable so my kids can play for hours, and I don’t have to worry about them getting hurt. There are so many fun ways to play with Wubble Rumblers. Here are some ideas my boys came up with! Have an Epic Battle Wubble Rumblers can be played with alone or together. We were provided the Ninja, Wrestler, and Wrestler Fist, and my boys loved playing with them together. They had epic battles between the Ninja and the Wrestler as well as used the Fist to battle the Wrestler. Take the fun a step further by building a ring for your epic battle. Kids can use whatever they have around the house like boxes, pillows, rope, and more. This is a great way to boost creativity while enhancing spatial organization and reasoning skills. Since the Wubble Rumblers are lightweight, my son learned that tossing them up in the air was a fun way to play. He tried to see how high he could throw it and how long it took to come down. Another fun way to play is to throw the Rumbler up and see how many times you can clap before catching it. This helps build gross motor, visual motor, and motor planning skills. Friends and siblings can also play a fun game of catch. They can see how far apart they can go and still catch the Rumbler.

How Far Can It Go Like mentioned above, my boys loved using the Fist with the Ninja and Wrestler. One fun game they came up with was to toss the Wrestler or Ninja and then use the Fist to punch it. They had a lot of fun seeing how far the Rumbler would go after being hit. This is a great introduction to physics while also building motor and visual skills. Wubble Rumblers are not only fun but they are affordable too! Each one can be purchased at Target or on the Wubble Ball website for under $15. They make for the perfect gift for active kids. They are also great additions to any playdate!