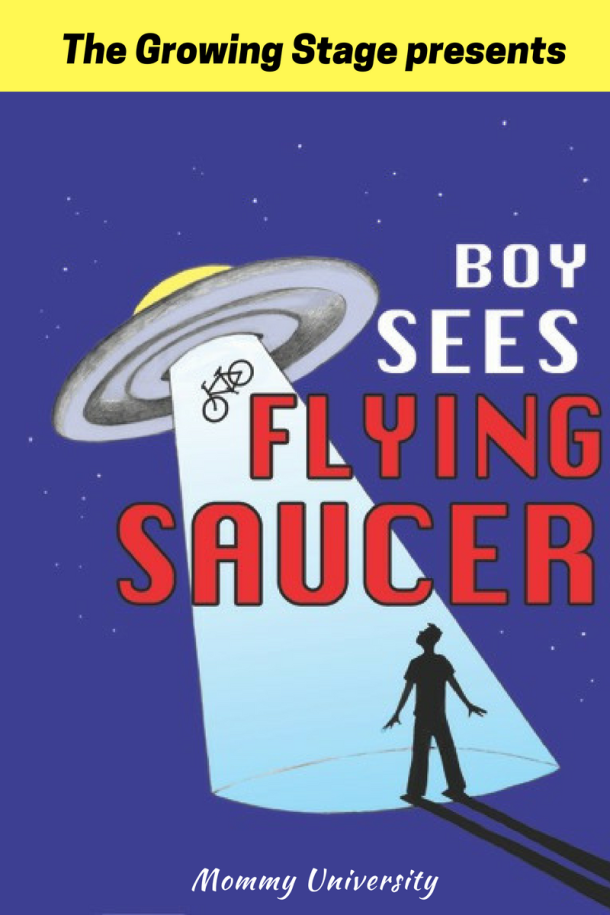 What long running show premiered in 1966 and changed the landscape of television?

Star Trek premiered one year before the story begins in Boy Sees Flying Saucer. The science fiction television show was unique as it launched thousands of young minds to think about space travel and interacting with aliens. It was also reflective of the American mindset. As a nation, we were competing with the Russians to expand the space program and put someone on the moon.

Boy Sees Flying Saucer brings us back in time when there was one black and white television in the home and the remote control was the youngest child. As a nation, we were fascinated with outer space including Bobby Radcliffe, a young boy that just wants to ride his bicycle and read comic books with his best friend. After misplacing his bicycle one night, he informed his older sister, Stacy, that a flying saucer stole his bike. In turn, she shared that information with the remainder of the town. Responding to the call, Sheriff Thomas and his comic sidekick Deputy Debbie Healy find mysterious markings where the bike was last scene which sets this story on fire in the community! Soon, Bobby is getting attention from the coolest girl in town as well as some visitors that traveled further than Washington DC. While I am accustomed to the roaring musicals at The Growing Stage, I applaud the artistic risks that they take. Boy Sees Flying Saucer is making its world debut at the children’s theatre of New Jersey! From the bright and bold set designs that echo the artistic illustrations of the popular comic books to the enthusiastic acting, this play ventures into a unique time in history.

Written by Mike Czuba, Boy Sees Flying Saucer is set in the backdrop of the 1960’s when Americans were worried about Russians as well as Martians. There are significant cultural shifts about to take place which can spark some fascinating conversations with your children. After we arrived home, I showed my son clips of Buzz Aldrin to which he asked if I could show him the video in color.

The Director Danny Campos compiled a fabulous ensemble that possessed perfect comedic timing as well as conveyed unique personalities. Ryan Hagan who plays the main character Bobby Radcliffe has that sweet disposition of the boy next door who tells a lie and can’t regain control. His best friend Manny Stevens is a loud and awkward character that is performed by Jonathan Meola and is an absolute pleasure to watch. The banter between friends gets even better when you add sassy older sister Stacy (Bailey Shada) or the Mystery Man (Davis Cameron Lemley) into the mix. Sean Quigley evokes the intense tension of Bobby’s father, Ray, while Ginny Bartolone balances the couple as Bobby’s protective mom. The colorful characters infuse a healthy dose of humor. As we entered the Historic Palace Theatre, music blasted through the sound system that made you tap your feet. From the soft melodies of The Monkees to Aretha Franklin, the music was uplifting and upbeat. Throughout scenes and during intermission, the music creates an ambience and provides us with a background to the story. The music was the soundtrack to the 1960’s and inspired us to step back in time of Boy Sees Flying Saucer. At the end of the show, guests can meet and take pictures with the cast. This is always a highlight for my kids as they love to see the characters up close. It adds a special touch to the experience and gets kids even more excited about being involved in the performing arts. Boy Sees Flying Saucer runs through March 25 at The Growing Stage so don’t miss your chance to see this amazing production! To learn more and purchase tickets, please visit their website.