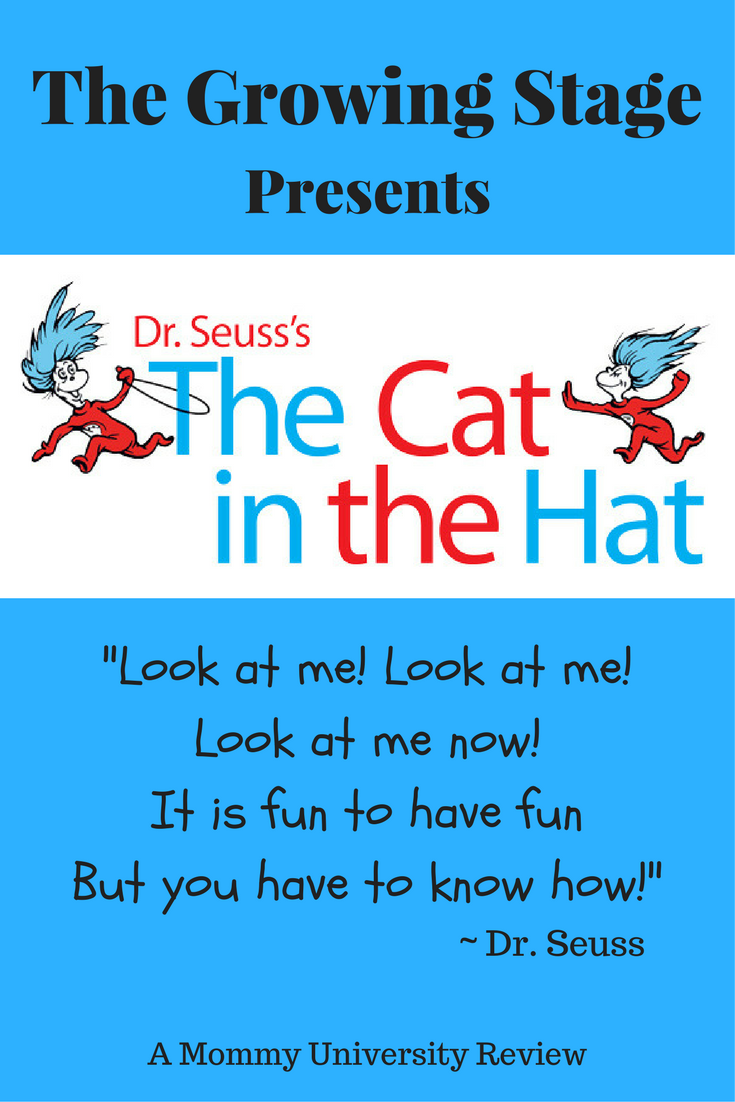 The Growing Stage’s interpretation of Dr. Seuss’s The Cat in the Hat was an example of children’s theatre at its finest. When we arrived on a rainy Saturday afternoon, the house was packed with happy, excited and thrilled little ones ready for an adventure. I loved hearing them giggle, cheer and clap, and I especially loved seeing the smiles on their faces as they watched the show in awe. Children’s theatre is supposed to capture the hearts and minds of the youngest of theatre goers. It taps into their imagination and innocence while introducing them to the amazing world of performing arts. While adults may smile at a silly facial expression or grandiose gesture of awkwardness, a child will find it hilarious, engaging and entertaining. Children’s theatre is whimsical, playful and lighthearted allowing little ones to become engaged and a part of the show.

The Growing Stage captured all of the above with their performance of Dr. Seuss’s The Cat in the Hat. From start to finish, my boys had smiles on their faces. The over the top mannerisms and behaviors of The Cat were met with delight from the children in the audience. David Cameron Lemley did a wonderful job playing The Cat. We loved him in the other productions at The Growing Stage such as Peter and the Starcatcher and The Box of Stories but this show offered another side to his acting repertoire. His comedic portrayal was spot on and really captured the interest of the children in the audience. For those who don’t know, The Cat in the Hat theatrical production is based on the iconic book by Dr. Seuss. The play was originally produced by The National Theatre of Great Britain and this production was directed by Lori B. Lawrence. The show is about a brother and sister who are stuck home on a rainy day while their mother is out. They find themselves quite bored until an unexpected guest arrives. The Cat in the Hat adds excitement and chaos to their originally uneventful afternoon. He starts with fun games which quickly turn into one mishap after another. When Thing 1 and Thing 2 are released into the house craziness ensues! Najah Johnson and Alexandra Vecchio did an amazing job playing Thing 1 and Thing 2. They perfectly portrayed this pesky twosome that tears up the house as they whirl and twirl around. Donald Andrew Danford did a wonderful job playing The Fish who was the voice of reason amidst the craziness of the day. He really made the puppet come to life. Jason Pumarada and Marie Nicole were also stellar as Boy (Sally’s brother) and Sally. My family really enjoyed The Cat in the Hat at The Growing Stage. It was the perfect way to spend the afternoon together as a family. It also inspired us to take out some Dr. Seuss books and read!

The Cat in the Hat is playing for only one more weekend (May 19-21) so don’t miss this amazing experience. To learn more or to purchase tickets, please visit The Growing Stage website.