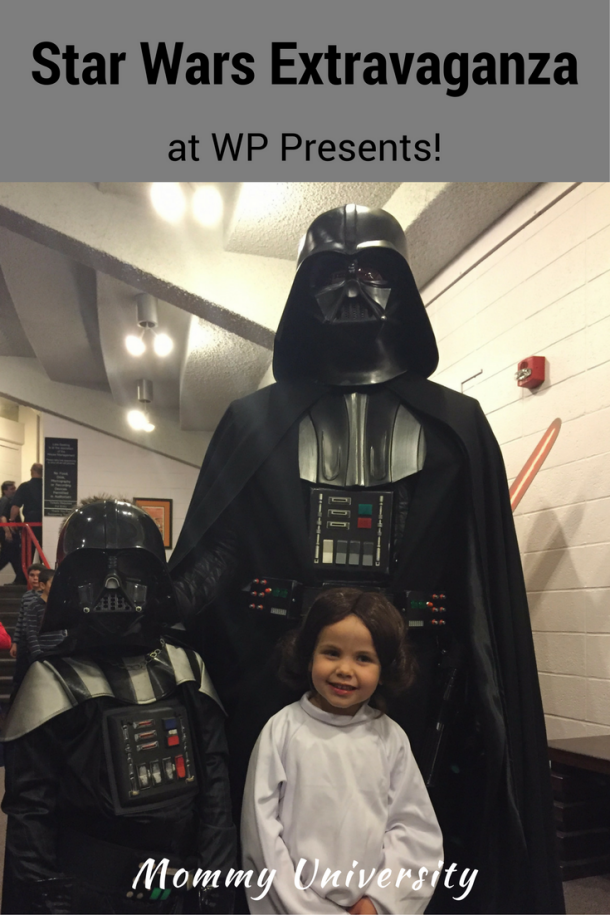 Mommy University is so excited to renew our partnership this season with WP Presents! In exchange for tickets to performances, we are so happy to be able to bring you all the entertainment this season as well as our honest review of the shows. The music of John Williams has transported us to fly on a bicycle with an alien, go on the last crusade with Indiana Jones, and use the force. Kicking off the Fall 2016 WP Presents! Season, the William Paterson Symphony performed several pieces from the collection of this legendary musician in Star Wars Extravaganza. As a child whose first film in the theater was E.T., first adventure film was Indiana Jones, and her favorite film was Star Wars, this night was spectacular! As guests of WP Presents! we experienced a unique opportunity to listen to the sounds that made our childhood magical. To celebrate this extravaganza, my kids dressed up as Princess Leia and Darth Vader.

As we entered the Shea Center for Performing Arts, we were greeted by a life-sized R2-D2 which followed my daughter as it played the words, “You are our only hope Obi Wan Kenobi.” Before listening to the music, my children were interacting with different characters such as: Darth Vader, Kylo Ren, Boba Fett, and many Storm Troopers from the 501st Legion: Northeast Remnant. Inviting well-known characters made the audience members excited to listen to the music! The music of Star Wars is easily recognizable from the notes that express the stern control of the dark side to the lighthearted tune that reflects Yoda. As long time fans of these films, we can recognize the music but did not fully understand how the sounds of the various instruments combined to create a specific melody. What I loved about this event was how Dr. Sandra Dackow made this performance not only informative but engaging as well. Listening to classical music can be a struggle; however, the Star Wars Extravaganza introduced these instruments in a unique manner. One of our favorite moments was learning about the musical instruments that comprise the symphony and which sections they belong. As different members played music to demonstrate how the sounds are made, Dr. Dackow elaborated what message the music can express. What also kept my children’s interest was that various symphony members were dressed as characters from the movies that we love. We began to identify Darth Maul with Percussion and the Indiana Jones playing violin (and flute). As the music began with E.T. then to Indiana Jones, it was after the intermission that the music of Star Wars films was played. The Imperial March invited members of the 501st in front of the stage where Darth  Vader and Dr. Dackow had a battle to continue leading the orchestra. Don’t worry, no one was harmed despite the use of light sabers! The Star Wars Extravaganza was a unique experience that exposed my children to musical instruments using a whole new approach. The WP Presents! offers wonderful programs to families that promote an appreciation of the arts and this program was one of my favorite events.

The next WP Presents! show will be Pinkalicious the Musical on November 5, 2016, at 2pm. For a full schedule of family friendly shows click here!

A Splendiferous Review of Fancy Nancy