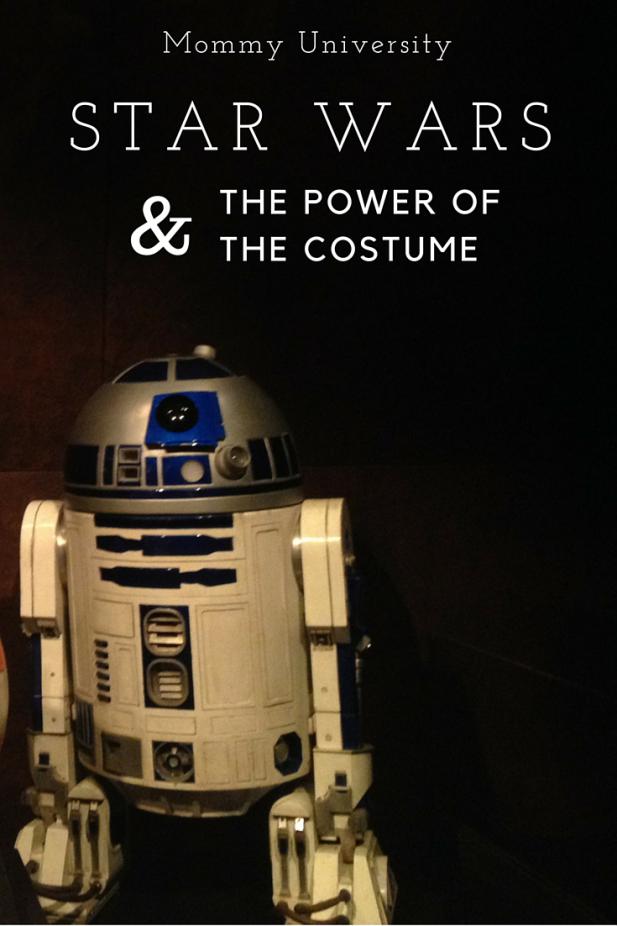 “The costumes have a tendency to appear on the screen in a very short amount of time. It’s very hard to see the detail and the thousands of hours of work that go into each (one)”- George Lucas

Museums do not just present history, they are community centers that present connections.  At Discovery Times Square, the recent exhibit, Star Wars and The Power of the Costume, offers us not only the history of iconic characters as imagined through their costumes, it also provides us with insight into the significance of attire in pop culture. We were so excited to be invited attend a recent media event that allowed us to explore this out of this world exhibit! 3 Reasons to See The Power of the Costume

While majority of the costumes are worn by faceless mannequins in this exhibit, there are many layers that will appeal to each member of the family.  There are plenty of light sabers held by the Jedis and Sith that can be lit with the press of a button while others turn on when there is movement.  The fun is in the discovery as you walk through the exhibit.  Since this exhibit is based on a film franchise, there are small tablets showing clips from the movie and various documentary clips on the making of the costumes as well as sketches of the initial drawings. The Dark Force doesn’t scare us as the force is strong at Discovery Times Square.

What I found the most interesting is the station where the visitors can touch the fabrics that were a sample of the clothing. While Leia may have worn simple clothes, Padme Amidala had the wardrobe that a fashionista would love.  The clothes are complex, ornate, and stunning which reflects her evolving role as a Princess, Queen, and Senator. The second section that kept us returning was the room containing one original Stormtrooper costume.  In the first film, only 50 Stormtrooper costumes were made and pretty much destroyed by the time filming finished.  This room showcases one of the rare originals and surrounding it are the iconic Stormtrooper helmets.  The room is created as an optical illusion because when you enter you think there are far more helmets than there are. What an amazing sensory experience! No costume is needed to become a Stormtrooper as this screen converts you to one. But dressing as one is still fun.

From Vision to Delivery

Within The Power of the Costume, you can see the origins of the most warm and endearing droids created for the screen which is C-3PO and R2-D2.  While these costumes were not sewn, actors were inside these designs and their origins have a specific context.  For example, C-3PO who often times spouts about “delusions of grandeur” was inspired by “Maria” from the silent film Metropolis.  You can see a drawing of their original idea for this character and read about how it transformed to one of the most iconic characters today. Within the exhibit, there are many of Padme Amidala’s clothing which was extensive and constantly changing based on how she was changing in leadership roles and her relationship with Anakin Skywalker.  The detail on each of these outfits is astounding to those of us that go online to buy our latest shirt.  If you have a child that is fascinated by fashion they will definitely enjoy this exhibit which has complicated and diverse outfits. For me, what I learned is how much thought, time, and consideration went into the development of every character even those that appear for a few minutes in one film.  George Lucas referred to historical influences when he imagined these characters which makes this exhibit so intriguing as you are learning about another time period when you look at the characters. Star Wars becomes a classic story that is easy to fall in love with because it is the reimagination of tales we have heard before: love, struggle, oppression, and independence.  When we look at the movie, the historical threads are there but by visiting The Power of the Costume it is made apparent in its presentation.  One of the most powerful images is the mindless and faceless Stormtrooper who reminds us of Nazi Germany. Another iconic figure in the Star Wars history is Han Solo.  When Jedis balance the force and evoke a feeling of a monk and the Stormtroopers have roots in Germany, it is Hans Solo who is the perfect example of a rebel.  As he enters the final scene of the first film, he yells “Yee-haw!” but it is his clothes that scream American gunslinger.  From his boots to his side strapped pistol, he is reflective of an American western film. Hans Solo reminds us of an American gunslinger while Chewbacca is the combination of a dog, cat, and monkey.

Over 70 costumes line the walls of The Discovery Times Square which invite the Star Wars fan to be mesmerized with seeing in real life what they have seen on the screen, yet there are multiple opportunities available here.  Children developing a fascination with film, can have a peek inside the meticulous imagination that created a whole universe.  Individuals intrigued with fashion can see the hours and skill needed to make such intricate designs.  And yes, the Star Wars fan can watch their child fall in love with the same films they did. We had an out of this world time at Discovery Times Square, and we cannot wait to come back to see Star Wars and the Power of the Costume again! See more photos of this amazing exhibit on our Facebook page!

Star Wars and The Power of the Costume is on display at Discovery Times Square located at 226 W 44th St, New York, NY 10036.