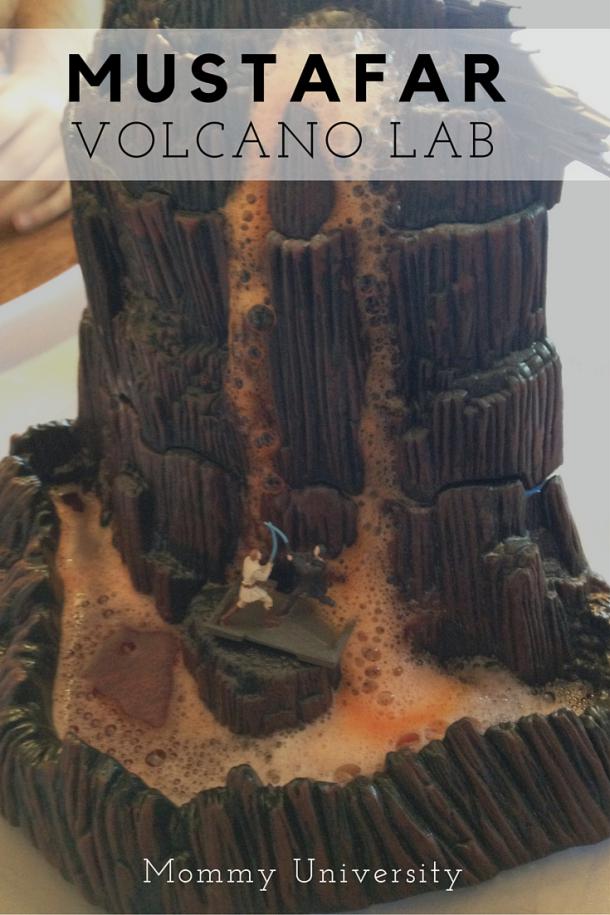 The fiery battle between Darth Vader and his former master, Obi Wan Kenobi, took place on the volcanic planet of Mustafar.  This planet in the Star Wars mythology was used to mine lava as well as discard of evidence.  The small planet consists of two types of texture: rock and lava.  Uncle Milton Toys, a favorite at Mommy University, layers science with the story lines of the iconic Star Wars movies in the new Mustafar Volcano Lab. We were lucky enough to receive a sample of this amazing brain boosting toy in exchange for sharing all it’s wonderful benefits with you!

The replica of the Mustafar planet enables children to launch their own science experiments.  The toy volcano scene hides three tubes which hold the material for the science experiment.  Instructions include three suggested science experiments as well as information about volcanoes.  As well, there is a container to help pour the necessary ingredients.  My favorite accessory is a miniature Anakin Skywalker (prior to the Darth Vader clothing) and Obi Wan Kenobi in battle.  Whether you are a Star Wars fan or not, there is an appeal to volcanoes for children which makes the Mustafar Volcano Lab a great addition to any child’s toy shelf! 3 Benefits of the Mustafar Volcano Lab

Promotes a Love of Science

Included in the Mustafar Volcano Lab are three science experiments that require common household items. If you do not have the ingredients, it is a quick trip to the food store and they can be used repeatedly.  The experiments are easy enough for children to independently measure themselves but the part I enjoyed the most was that children are encouraged to seek out how the three experiments produce different results.  As scientists, it is very important to pay attention to details and realize how an experiment might have an altered reaction. Like many children, mine love to watch videos of volcanoes.  After a recent trip to the American Museum of Natural History, they have an increased fascination with these natural formations.  Uncle Milton always includes academic information with their Star Wars Science toys and in this instance we have been reading about different types of volcanoes and interesting facts about them.

My son often times imagines himself in the Star Wars films.  While we have enjoyed making the Uncle Milton Mustafar Volcano Lab explode a dozen times, he has talked about the eruption as though he was imagining the film.  He has also collected his dinosaur figurines around the Mustafar Volcano Lab for pretend play.  Due to the size of the volcano lab this would be great to place in the center of a dinosaur scene; however, right now we are using it mostly with Star Wars figurines. He is always excited to play with Uncle Milton Star Wars Science toys.

While the emergence of the Mustafar scene marks the transition from Anakin Skywalker to Darth Vader, this Uncle Milton toy captures our imagination again.  The Mustafar Volcano Lab is designed for children ages 6 and up and can be purchased on Amazon for under $15 using our affiliate link.  As learners intrigued by volcanoes, we will be taking this toy out on a regular basis whether it is after watching The Revenge of the Sith or visiting a museum exhibit on volcanoes.

Blasting Off with the Millennium Falcon UV Light Laser