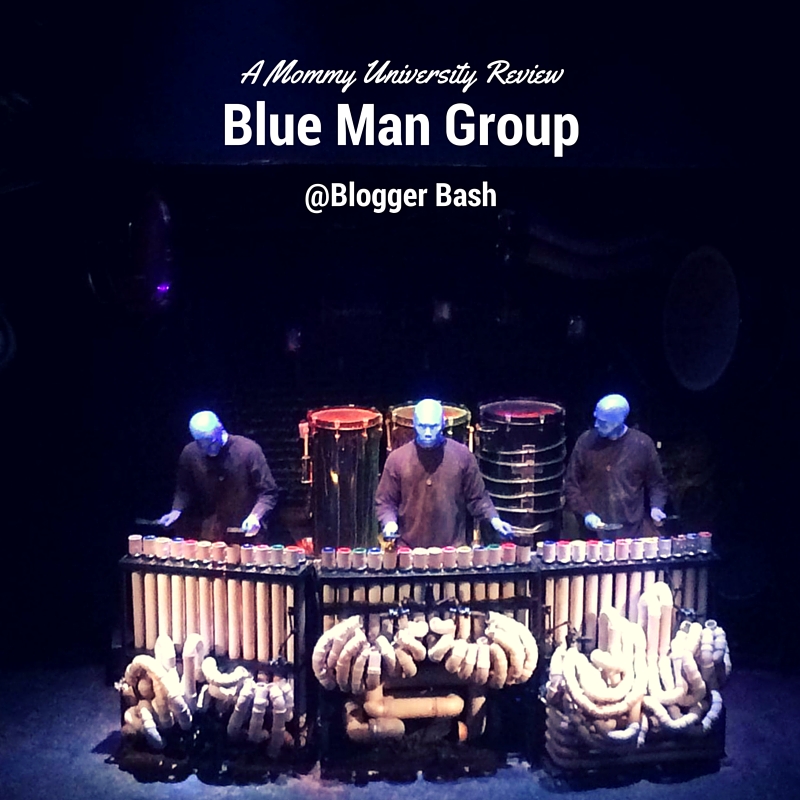 In full disclosure, we received tickets for Blue Man Group as part of our Blogger Bash experience. A review was not required.

Like many I have heard the whispers and rumors of a show that did not fall into one specific category, but the most amazing experiences usually don’t have a concise description.  Thus, my love of Blue Man Group was born.  As participants of Blogger Bash this year, we were invited to watch a special performance of Blue Man Group in Astor Place. I was intrigued to experience what this show was all about.

It is widely known that they are a group of men painted blue that play drums and do not talk.  However, after 90 minutes and no intermission, I learned this show incorporates music, technology, humor and an impressive interaction with the audience. As a writer for Mommy University, I am always thinking about the educational components of a performance and Blue Man Group definitely embeds a lot of qualities to engage your brain.

The show begins and ends with drumming by Blue Man Group.  Accompanying them at different points is a support band that can be seen with their glow in the dark costumes but most times will just be heard.  The show has some great music but what impressed me the most was the musical innovation demonstrated when they played pipes with drumsticks and then manipulated the sounds as they moved the pipes. Creativity can open the door for music to appear as demonstrated when music can be created from unusual objects. Encourages Audience Members to Go with The Flow

In addition, to Blue Man Group’s ability to catch marshmallows in mid-air with their mouths, there is a lot of give and take that occurs with audience members.  Essentially, this means that my theater going experience with this show on that day will be uniquely different from any other Blue Man Group performance.  Often times, we think that going to the theater entails sitting in the audience and watching; however, Blue Man Group redefines this experience.  As I watched an audience member throw pieces of Toblerone chocolate to one of the Blue Men (and yes he caught it in his mouth), I realized that it is important for us as individuals to go with the flow as the surprises in life sometimes are sweeter when we let go of control. The members of Blue Man Group engage with their audience. Thus, each show has unique qualities.

Three over sized cell phones came from the ceiling for a portion of the show and as each screen was swiped by the Blue Men, it made me realize that it is okay to live life in the moment.  Not all moments need to be documented by camera, posted on Facebook, or tweeted.  In fact, there was a comment about the audience members documenting the show (which we admittedly were).  We had the pleasure of receiving permission to take pictures which is not typically allowed; however. even with photos, it will not fully communicate how cool this show is.

The information presented in this segment of the show will make you think about technology and our reliance on it.

Drums splattering paint, glow in the dark rock band, flickering lights, toilet paper, over sized cell phones, all of this is a sensory playground for older children and adults.  The front seats are called the poncho seats as audience members get to wear ponchos as they are splattered with paint or bananas (as one person described to me).  If you have a child that is sensitive to loud noise or lights, you will need to decide if this show will be too much for them at this time. (It should be noted that Blue Man Group will be doing an Autism-friendly show on September 26, 2015 at 2pm in NYC, October 4, 2015 at 4pm in Chicago and December 5, 2015 at 6pm in Orlando. A donation will be made to Autism Speaks.) It was so amazing to see these amazing entertainers perform using glow-in-the-dark paint while drumming!

Blue Man Group will impress you as a multi-sensory, musical experience that gets you to think.  During one segment, a voice projects over the sound system explaining how the eyes understand and perceive the world.  There are authentic messages within the show.  They happen often and quickly which means that each person who experiences this show will take something different from it. Brief moments during the show you will be exposed to information that will make you think.

Established over twenty-five years ago by three college graduates they created Blue Man Group in a small theater in New York and now it is a global sensation.  The show exists in several cities including: New York, Chicago, Boston, Orlando, Las Vegas, and another traveling tour.  The show is refreshed with new music, technology, as well as new stories.  It is a unique, enthralling and innovative performance that we are thankful to experience! It was unforgettable!