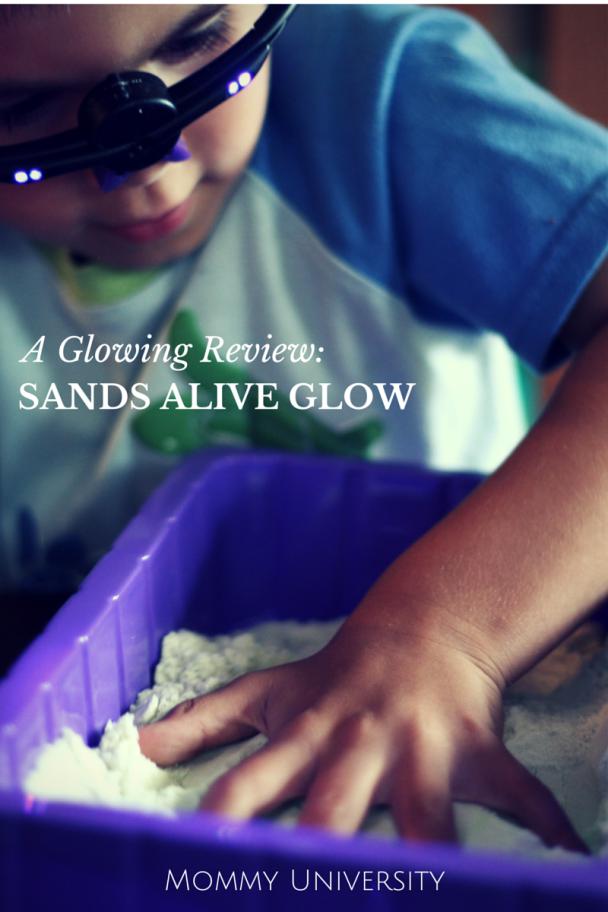 In full disclosure, Play Visions provided us with the Sands Alive Glow in exchange for an honest review.

A sensory toy that has been populating shelves of our favorite toy stores, Sands Alive Let’s Go Learn, was reviewed by us last year.   A new addition to the collection is Sands Alive Glow which is an engaging toy that comes with 1 pound of glow sand, UV LED glasses, a UV pen light and play tray.

Since my son loves tactile toys and based on the prior success of Sands Alive Let’s Go Learn, he insisted we open the box right then and there.  Sands Alive Glow is unique in that by turning on the UV pen or UV glasses and pointing them at the sand, it glows in the dark. If you are not familiar with Sands Alive, it offers many developmental benefits for children.  It can be therapeutic and provide tactile feedback.  Sands Alive Glow can also boost fine motor skills, increase academic knowledge and spark imagination. A benefit of going to the beach is that kids can practice writing letters in the sand, but a beach is not always accessible to us especially when it’s raining.  I love the UV pen and so did my four-year old son as he quickly scooped it up to write letters.  He was so proud that he could write the letters in his name in the sand. To my son, he is enjoying one of his toys; however, as a parent, I can see that he is practicing and becoming more comfortable with his pencil grip.  Three year olds can draw lines on this unique platform.  As well, you can draw out shapes to have young children guess them.  I think you will find, however, that your children will prefer handling the pen all on their own. Kids will have fun waving the pen around to write letters, shapes, or designs in the sand.

When we think of sand, sandcastles is one of the first images our brain conjures.  My children always talk about making castles especially once their hands touch sand.  The beauty of all Sands Alive products is that it could be raining or in the middle of winter, and children can enjoy making sandcastles.  Sands Alive Glow introduces a fun element where kids can decorate their sandcastle by using the pen to create drawings or patterns.  If your child doesn’t want to make sandcastles, they might want to make a town, animal or house.  The pen enables them to make stripes, stars or just add unique decorative elements. This fun and educational toy keeps him engaged and entertained.

My son can sit and play with Sands Alive for a long period of time and Sands Alive Glow is no different.  I am strangely not as concerned about him being quiet when he is playing with this toy.  He creates his own games, drawings and interactions.  When he just plays with Sands Alive Glow, he unlocks his imagination as I can overhear him creating stories surrounding what he is doing.  Because he seeks out sensory feedback, he will sit and play happily.  My daughter is the same as she has played with this toy independently.  I have a warm glow when I watch them as they create their own worlds. My son loved tracing his hand with the pen. He also enjoyed playing with his construction vehicles in the dark. What do you think your child will do with Sands Alive Glow?

We thoroughly enjoyed reviewing Sands Alive Glow. My son is perfectly content requesting to play with “sand” even when the box is not in plain sight which tells me that this is a toy he identifies as one of his favorites.  The Sands Alive Glow Starter Set can be found on Amazon for $24.99 using this affiliate link.

Ready, Set, Play! The Benefits of Open-Ended Play at Home

5 Brain Boosting Ways to Use a Sandbox