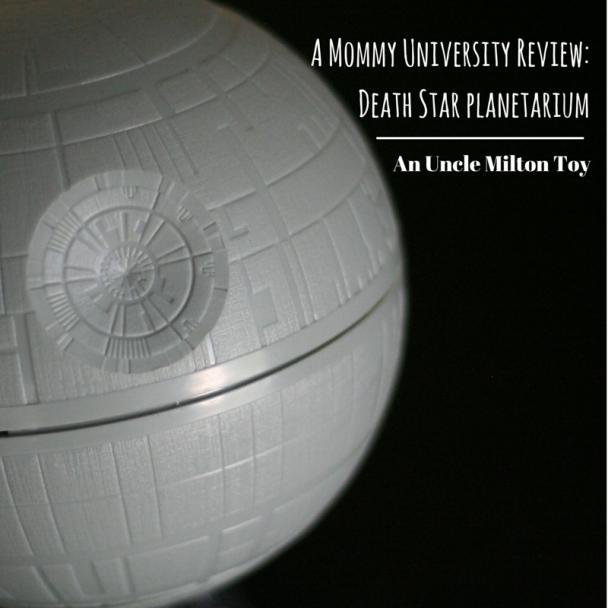 In full disclosure, we were provided the Death Star Planetarium from Uncle Milton Toys in exchange for our honest review.

Star Wars innovated how movies were made as well cementing a genre of film: science fiction.  Libraries and schools celebrate Star Wars day as did Mommy University with a May the 4th Be with You party.  Star Wars capitalizes on imagination, science, and possibility.

Mommy University was lucky to receive the Death Star Planetarium to be featured in our Star Wars Day from Uncle Milton.  Since the short time that we have been introduced to Uncle Milton toys in our home, we have been impressed.  This toy company intertwines science, imagination, and possibility.  It’s not surprising that their collection Star Wars Science features many educational and incredibly fun toys.

Death Star Planetarium is designed for children ages 8 and up.  It is not a toy that should be placed in the hands of those younger because it does contain parts that may stop working if dropped or not treated well.  When displayed, the Death Star is a stunning accessory for any young (or old) fan of Star Wars.  There is a power button towards the bottom which when turned on enable two different solar systems to be displayed.  When you remove the cover, our solar system can be seen in a darkened room. Remove the black layer and your family is now transported into the realm of science fiction and the Galaxy. The Death Star Planetarium is stunning to display on the shelf but it offers so much more.

You can use either platform, our solar system or the Galaxy, to play I-Spy with your children.  For this exercise, we had fun locating different planets from the Star Wars movies.  Recently, my son has developed an appreciation of Chewbacca, who is from the planet Kashyyyk, so this weekend everyone crowded in his room to find Chewie’s home planet.  As they learn the different constellations we will return to the Milky Way Galaxy and try to identify different stars.  This is perfect practice when you take them to look at a clear night sky.

Introduction to Astronomy AND Mythology

If children express an interest in the stars, outer space, or even Greek mythology, a small planetarium is a great launching pad.  Not all parts of New Jersey or the United States have the ability to see the stars and planetariums are not always near to our homes.  If children are curious about stars and outer space, the Death Star Planetarium is a wonderful opportunity to introduce children to astronomy.  Since it contains the constellations from the Milky Way Galaxy, children can locate the Big Dipper, Orion, and other stars.  This is perfect practice if your children can eventually visit a real planetarium.

If your child has a fascination with Greek mythology, remember that some of the constellations are named after characters such as Andromeda, Hercules, or Perseus. As well, there are planets such as Mars, Venus, and Mercury.  While mythology and science do not commonly intertwine, it is always fun when they do.  Your child may want to write a mythic story and then find stars in the planetarium that resemble a character from their story. The first layer of the Death Star Planetarium is the Milky Way Galaxy.

Outer Space is the great unknown.  Scientists are discovering new places and solar systems with advancements of technology. The Death Star Planetarium offers the opportunity to invite children to think and talk about outer space.  Do they think that there is life on other planets? Do they think we can travel to these other planets?  How do they think we can travel there (spaceship, teleporter, other transportation system)? There is no right or wrong answer, just simply a conversation with your child.

As suggested earlier, your child can also make up their own constellations and accompanying stories.  By identifying some of the constellations, do they see other images in the stars The second layer is the Galaxy where Star Wars take place. This will interest most Star Wars fans as they can see how close or far the stories from Star Wars took place.

A few tips you should be aware of which includes: our solar system is not labeled while the Galaxy is labeled; the Planetarium is best in a small room otherwise the graphics become blurry; and this is a toy that requires a mature child to handle as it is delicate.

While not playing with the Death Star, my son has it proudly displayed on his dresser.  It is designed carefully so that it offers the Star Wars fan several possible ways to interact with the planetarium.  Right now, he enjoys when we point out the planets he has seen in the movies and every so often we can switch to our solar system for increased learning.  There is nothing like the sound of your child’s excited voice and realizing that they are having a fabulous time learning!

Want to explore the galaxy at home? You can purchase your own Uncle Milton Death Star Planetarium for under $20 on amazon.com (affiliate link).

May the force be with you!