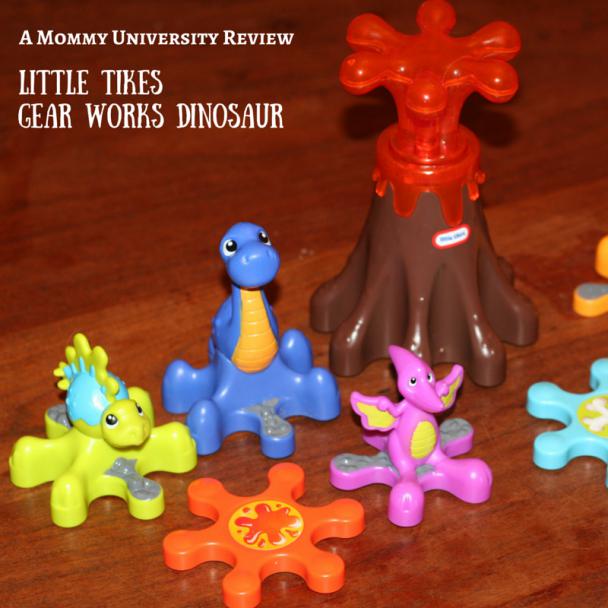 In full disclosure, we were provided the Gear Works Dinosaur in exchange for our honest review. This post also contains an affiliate link.

Little Tikes puts together quality toys that stimulate young children’s imagination.  Dinosaurs spinning around a volcano may appear like a simple toy; however as your children attach the different gears to the volcano, their brains are experimenting to see how changing the gears can result in a different outcome.  They are testing cause and effect to determine the best scenario.

When my husband and I originally opened the package we thought the purpose of the toy was to make all the gears move simultaneously.  Sadly, we were not successful.  We could not get all the gears to move in synchronized motion which was the perfect lesson for us.  Our children became the teachers as both of them played with Gear Works repeatedly.  My daughter immediately was hooked as she maneuvered the pieces around.  The next few days my son would take the toy out each morning and play with it independently and happily.  This is an open-ended toy.  There is no end goal aside from the educational and developmental activity that takes place.

Gear Works Dinosaurs includes several dinosaur gears as well as two standard gears that can be attached to the volcano.  When the child presses the volcano it will spin thus causing the gears attached to spin.  Please note, the gears do not spin unless they are connected to the volcano.  This toy does require batteries and makes sounds; however, the soundtrack is calm and plays at a decent volume.  The package states that this toy is for children three years and older, yet my 2.5 year old daughter gravitated to this toy and responded very well with it.

Bright colors and smooth texture will appeal to young ones.

The first developmental benefit of this toy is enhancing fine motor skills.  The gears do not spin long and since the pieces move away, they will continuously need to be re-attached to the volcano.  My children kept moving the pieces around.  They formed lines and had the dinosaurs surrounding the volcano (ignoring the two standard gears). They attempted so many scenarios that each time their fingers became more adept at manipulating the pieces.

Children love pressing the volcanic button to see what new results will happen.

Children can create, manipulate and move the pieces around to create different scenarios.  This is an introduction to building so the dinosaurs become a great connection for children who need a face to their building toy.  For my son, the dinosaurs made it easier for him to engage with the toy than if it was only gears. The T. Rex was the connection for him as he made it roar and play with the other dinosaurs.  He began to talk about what the dinosaurs were doing and thus we could see his creativity unfolding before us.

This is a basic building toy which helps develop problem solving skills.  My children watched cause and effect which expands their problem solving skills. As I mentioned, the children played with this toy everyday for the first week it was in our home, and each time they searched for new scenarios and experimented various layouts so that they could understand how the pieces worked.

She immediately gravitated towards Gear Works moving the pieces into different layouts.

This is a beginner mechanical engineering toy.  This toy is designed for younger children and the batteries make the gears move where as with other gear-type toys for older children they do not have batteries. For me, I felt this was appropriate because of the children’s age playing with the toy.  My children through repeated play began to learn and understand that the gear needed to be connected with the volcano and that it made the other pieces spin.