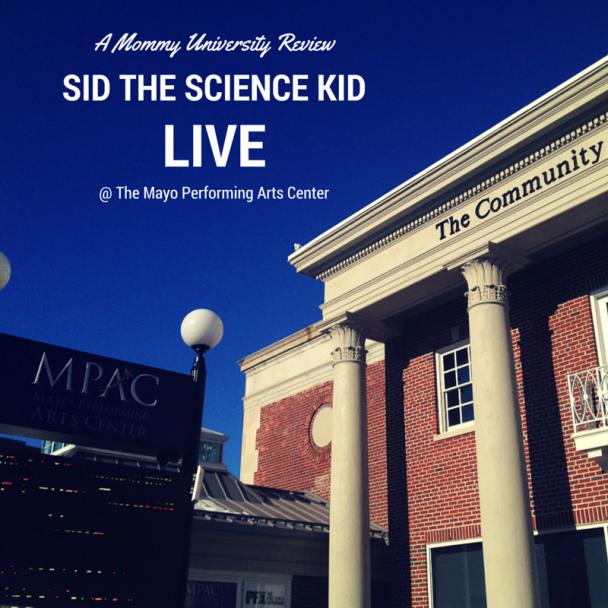 In full disclosure, we received four tickets from The Mayo Performing Arts Center for Sid the Science Kid Live in exchange for an honest review.

At Mommy University, we are big fans of Sid the Science Kid who appears on PBS.  In fact, we boasted about Sid in our article “Who is Sid the Science Kid?” because we feel this is a fun show that teaches children (and their parents) that science surrounds us and can be enjoyed by all.  We were thrilled to receive tickets to see Sid the Science Kid Live show at The Mayo Performing Arts Center.

The Mayo Performing Arts Center has phenomenal family programs throughout the year.  Recently, they had The Wild Kratts and The Rainbow Fish. In the coming weeks, they will have Laurie Berkner Band and Chuggington Live.  Their calendar year is populated with musical performances, speakers, and shows that appeal to the entire family which is a wonderful opportunity to begin fostering a love and appreciation of the arts with little ones.

As fans of the TV show, we were curious how the performance was going to highlight science. Here is my spoiler alert: Sid and his friends (Gerald, Gabriella, May, and Teacher Susie) explored the five senses. The show uses songs, dancing, humor, charts and interaction with the audience to successfully communicate their message.  My entire family had a fantastic time from “Rug Time” to the closing number which had the entire audience squealing with joy.

My son was ecstatic to see his favorite show LIVE and as a parent I was excited to watch him develop an appreciation of science.

Sid the Science Kid Live introduces and reviews the five senses (Seeing, Hearing, Touch, Taste and Smell) and (spoiler alert) introduces children to a sixth sense.  With the help of Teacher Susie, the children and audience explore each sense by listening to a lesson, watching how Sid and his friends investigate the sense, and listening to a catchy song.  When the children play I-Spy, they are investigating how they use their eyes. When Gerald pretends to be a dog, they discuss scent which is followed up with the song “Detective Roper.”  Sid focuses on repetition and reviews the information with different songs and methods so that children can understand.

Encourages an Appreciation for Science

When I first watched Sid the Science Kid TV show, I was surprised that they introduced charts and how they can be used. I always thought this was above my children’s comprehension level but during the show they used a chart in a simple format that made me realize this is a wonderful introduction to scientific methods. The visual tools included a sign they held up as they sang about each sense and the part of the body it relates to. I personally enjoyed how they applied that body part to a chart to reinforce the message.

Most times when we attend a show, we watch the performance and that is the end of the story. Sid the Science Kid Live, however, engages the audience by speaking directly to them and asking for their assistance as they perform their science experiments. Several times, my daughter was waving to Sid and his friends in response to their questions. This engagement continued as children danced in their seats and in the aisles which was completely acceptable.

My favorite part was during the last segment of the show when Sid, Gabriella, Gerald and May put on a show performing each song that review the senses.  Children were encouraged to come to the front and dance which was perfect for children who were struggling to remain seated. The paper streamers that shot out at the end surprised us (and might startle young ones) but it was a great tactile experience.

Fosters an Understanding of Social Expectations

It is very challenging for little children to remain focused during a show.  Sid the Science Kid Live is seventy-five minutes with a fifteen minute intermission.  Snacks and refreshments can be purchased at The Mayo Performing Arts Center and brought into the theatre (some drinks are not permitted such as soda) which is perfect for my children as they snack often. Throughout the show, the characters are engaging the audience which is perfect as it is very difficult for children to have the attention span to sit quietly.

This show, like many shows at the Mayo Performing Arts Center, is a great introduction to understanding the expectations of attending a theatrical performance without being too rigid (and feeling like everyone is watching as your child bounces up and down). The songs are an ideal length and offered in between the dialogue with sufficient time.  It is a well thought out show that did not have my children squirming but rather clapping and dancing.

Offers a Show Full of Humor

Humor is so important in our lives.  Children can be silly in our serious world which is a phenomenal reminder to us that we need to laugh. Humor is also a reflection of our world and our observations, and it offers opportunities for children to have a tool for dealing with stress. Often times, if we can laugh about our experiences we can be resilient.

There is a lot of humor in Sid the Science Kid which is also present in the live show.  The character of Gerald is a foil to the information seeking Sid as he lightens the mood with his play on words.  Gerald says some silly stuff that may not always make adults laugh, but he certainly makes the children laugh. My favorite comment from Gerald is when he yells for Sid to join him on the playground as he “cannot see and saw at the same time.”  The children also host their own “laughternoon” show where they exchange jokes that the audience truly enjoyed.

Sid the Science Kid characters are in full costume (except for Teacher Susie) which adds to the excitement.

We had a “super duper ooper schmooper” time at Sid the Science Kid Live show.  The staff at the Mayo Performing Arts Center are very friendly and welcoming which is a positive message to my children that this is a child friendly space.  The show is well designed to be engaging and enthusiastic, and the entire time it teaches our children to appreciate science through an artistic performance.