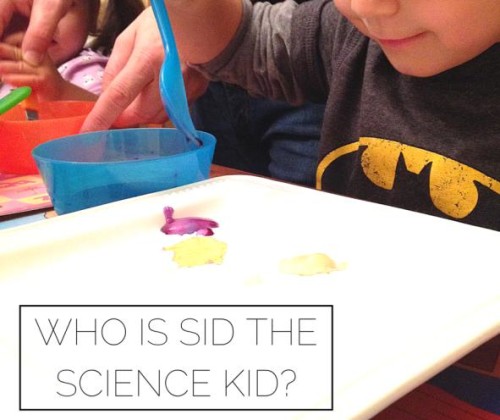 This post is not sponsored but does contain affiliate links.

Are you looking for a fun, entertaining and educational television show that will help your kids learn all about science?

Well, then you’re in luck! As a parent there are many things that surprised me including that my children are naturally fascinated by science. I learned this when they watched Sid the Science Kid, a show produced by the Jim Henson Company. Sid offers an introduction to science from the eyes of a young boy and his three friends, May, Gerald and Gabriela. There are five episodes in a week (each episode is thirty minutes in length) and within the week it focuses on one scientific concept. It is designed so that children ages 3-6 years old have the concept reviewed with different explanations and is repetitive because children this age need repetition.

Over the course of Sid’s day, from morning to preschool to arriving home, all characters explore Sid’s question. Several other characters who facilitate the conversation are his teacher, Ms. Susie, his parents and his Grandma. The presence of these other characters is specifically done to encourage an environment where everyone important to Sid fosters his intellectual curiosity.

Sid is very curious as most children are, and by exploring his questions, his classmates learn about scientific concepts. For example, one episode where Sid ‘s banana becomes mushy is a discussion on decay where each character gets involved. You might be wondering why not throw the banana out? Well, through the three steps of investigate, explore and discover the children learn that it is natural for fruits to ripen and decay. Besides, Grandma saves the day by converting the mushy banana into banana bread.

From measurement to estimation to transformation and more, Sid keeps exploring the world that surrounds him as our children are doing. As a parent, what I enjoy about the show is how it encourages children to follow their innate curiosity. My husband and I have learned (or relearned) some of these concepts by watching episodes with our children. There are also short suggestions of experiments that can be done within the episodes. If you are looking for additional experiments, the PBS website for Sid the Science Kid (parents page) has many suggested activities that are linked to the specific episodes.

Sid may not appeal as much to parents because his speech and mannerisms are very similar to a preschooler (without the whining typically associated with Caillou or so I have been informed). Sid has inspired us to do our own science experiments at home. I have found him to be educational, fun and a perfect for our family!

Want to check out some episodes of Sid the Science Kid? Check your local PBS channel for times. Episodes can also be found on Netflix or you can purchase DVDs on amazon.com.