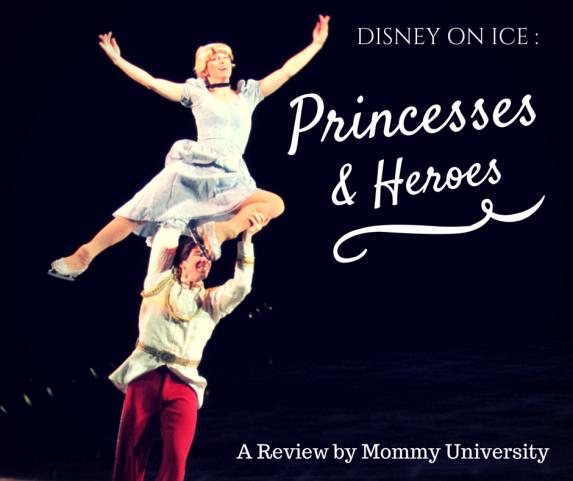 In full disclosure, Mommy University received 4 tickets to see Disney On Ice: Princesses and Heroes in exchange for our honest review.

A friend of mine who takes her daughter to Disney on Ice every year says that it is always a great show. “You will not be disappointed,” were her actual words. After watching Princesses and Heroes production at the Prudential Center on opening night, I can tell you her words reflect the better sentiment, “You will be amazed!”

It is no surprise that Tinkerbell was our hostess for the night. With her magical presence we embarked on a beautiful journey through several beloved Disney stories. Disney On Ice Princesses and Heroes encompasses several excerpts from the classic movies and stories we love. Some of the show included adaptations that were longer in time including several musical numbers while others included one inspiring song. The list of those in attendance was impressive and will satisfy any Disney fan.

At Mommy University, we pride ourselves on finding the educational value in everything we do with our children. Disney On Ice was no exception. This magical performance offered so many opportunities for growth for children of all ages.

5 Amazing Benefits of Seeing Disney on Ice: Princesses and Heroes

Children fidget as their attention span is still developing. For some children it will take longer to develop a firm grasp to sit down and enjoy the show. My children are classic examples of the children who don’t sit still but what I always find works the best are shows that capture their attention. Princesses and Heroes contains the perfect mix of uplifting music and love songs coupled with acrobatic ice skating which didn’t leave one minute for my children to be distracted. My daughter was caught several times bouncing in her seat to her favorite songs from Aladdin and Frozen while my son was absolutely mesmerized by the impressive dragon from Sleeping Beauty. (Spoiler Alert: The dragon breathed fire which made me gasp in excitement.)

Encourages an Appreciation for The Arts

In Disney On Ice Princesses and Heroes, children are introduced to beautifully choreographed ice skating. There were so many pair skating performances that left audience members speechless. The princesses such as Cinderella were gracefully thrown into the air, and Rapunzel was spun around as her body was parallel with the ground.

There were also the more elaborate pieces such as the utensils, Lumiere and Belle, who perform “Be Our Guest” and the vibrantly colorful number “Under the Sea” that contained many fish and mermaids. The partnership of the best music soundtracks, dazzling costumes, perfectly placed special effects and stunning skating means that children are receiving lots of sensory input which translates into a growing appreciation of theatrical performances.

From the acrobatic Rapunzel and Flynn to the ensemble skating performances, you will be amazed.

Children love to dream and Disney is a great platform to encourage imagination. Children are invited to other worlds that are magical and indescribable. Whether it is seven dwarves, a genie or mermaids, children are invited to envision new and wondrous places. This is also a perfect space for children to dress up as their favorite character. One of the best parts of the show (aside from the show itself of course) is admiring all the children dressed up. Shades of pale pink, purple, shimmering blue, teal and gold, made for a very colorful audience that sparkled. It was difficult to not look around and admire all the little princesses present. We saw Cinderella, Merida, Rapunzel, as much as Anna or Elsa.

Since there are so many stories shared throughout Princesses and Heroes, there are also equally as many opportunities to enhance language development. It is a benefit that so many Disney characters are represented because this enables you to discuss a myriad of highlights. Princesses and Heroes is amazing which means that children will be excited to talk about what they saw and share their thoughts.

For young children, you are identifying what they see and inserting exclamations. There are adaptations to stories which is a great talking point with older children. You can ask their thoughts on how well the movie and/or book was represented and what changes were made to accommodate the show as well as what character they would like to be and why. When the show is over, you can ask them what there favorite part was.

There are not many villains at Princesses and Heroes, which places the focus on the positive characters to our children. Disney highlights characters who overcome obstacles, ones that cherish family and friendship, and the most important message that love conquers all.   Innocence and childhood is short lived in this fast paced society which is why I think it is important for these messages to be promoted. Children do not need to be overwhelmed with complicated plot lines but rather swept up by the magic and the belief of possibility.

Threaded through each story is a running commentary about love. Aladdin and Jasmine feel isolated by expectations and find solace and a soul mate in each other. Ariel doesn’t subscribe to limitations on love, and the final act of Frozen teaches us that love is the most powerful force. We saw the friendship develop between Anna, Kristoff and Olaf, watched as Olaf sacrificed himself by almost melting and admired Anna as she made an act of true love. The special effects are stunning in this show and the Frozen adaptation included snow, explosions, and my favorite, a physical light display that Anna was frozen. It was heartwarming to hear the audience sing to all the songs and it was great to see Anna and Elsa spin through the air.

This isn’t a closed invitation, so many Princesses and Heroes are performing in this show.

A Disney fan will love this show as there are representations from the classic to the modern. Admittedly, my children are not familiar with all the stories they saw but for me that works better. For example, to help prepare my children for Princesses and Heroes we watched a few of the movies represented and as a follow up, we will now watch the remaining movies they have not seen as well as read new stories. Since there is such an array of stories represented, there will be nights to introduce Tiana, Aurora and Snow White as much as there are nights to enjoy all the ones they already love.

Princesses and Heroes is a phenomenal show that will have your children mesmerized.  If you want to see more photos, check out our Facebook album.

So what are you waiting for? Purchase your tickets today and create memories with your family that will last a lifetime!

For tickets go to www.ticketmaster.com or call (800) 745-3000.
*Ticket pricing is subject to change based on market demand.

To learn more about Disney On Ice Presented by Stonyfield YoKids Organic Yogurt, visit www.disneyonice.com, or visit them on Facebook and YouTube.