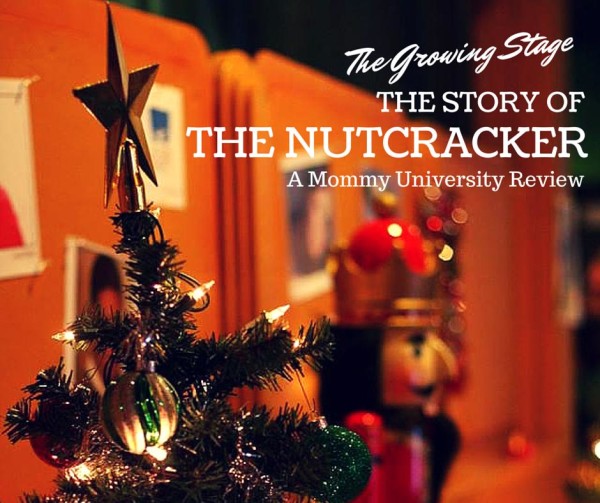 In full disclosure, The Growing Stage provided us 3 tickets to The Story of The Nutcracker in exchange for our honest review.

The Nutcracker rose to fame as a ballet production choreographed to the music written by Pyotr Tchaikovsky. Traditionally offered as a ballet, it is hugely popular around the Christmas season. The Growing Stage, the Children’s Theatre of New Jersey, is currently showing The Story of the Nutcracker which is a unique interpretation of this classic story modified for young audiences. My family had the pleasure of attending the opening weekend performance of The Story of the Nutcracker. We thoroughly enjoyed this wonderfully entertaining show, and we highly recommend that your family attend as well!

The Story of the Nutcracker centers around Clara, a young girl who has been gifted with a Nutcracker by her godfather, Drosselmeir, on Christmas Eve. After her brother, Fritz, breaks the wooden Nutcracker the entire family retires to sleep. During the night, young Clara is visited by an Owl and Drosselmeir who transport her to another world where she meets the human Nutcracker that battles the Mouse King.

The surreal dream transforms members of her family into key members of this story. On her quest to help the Nutcracker defeat the Mice King, they enlist the help of the Admiral of the Lemonade Sea and the Queen of Ice. After acquiring a special weapon (no plot spoilers here!), they confront the Mice King and his henchman and free the Sugar Plum Fairie.

This is an adaptation which means that The Growing Stage provides a new interpretation of this classic story which has been offered each year since its debut in 1996. It is impressive that this show is designed to engage and entertain children. From the maid, Frau Yungquist, who becomes the Ice Queen, to Captain Stahlbaum who becomes the Admiral of the Lemonade Sea, the acting was well done. Comic relief is intertwined in many of the characters’ performances; however, the primary force of physical comedy comes from the Mice King, Madam Mouserinks and the mice henchman. Don’t be surprised if you find yourself laughing out loud to the jokes!

My daughter enjoyed the dancing scenes such as the Flower Waltz and the Dance of the Sugar Plum Fairie. Seeing my two year old jumping in her seat pointing out excitedly, “They are dancing!” definitely warms my heart because she is not only having fun but also developing an appreciation for the arts. While my son is not the best example for remaining in his seat, he loved the dancing as well.

The stage from a bird’s eye view of The Story of the Nutcracker.

The brightly decorated sets indicated to children a change in scenes as well as story. The lemons floating in the Lemonade Sea were adorable and highlighted the Admiral’s ship. My favorite was The Kingdom of Sweets with its towering candy canes. Children will also enjoy the pageantry of the show, as they look at the costumes. The Nutcracker in his bright red jacket was a joy to watch, and my personal favorite was the silver bejeweled Ice Queen.

Afterwards, the characters greet audience members which is a delightful experience for children to meet their favorite characters and thus fall further in love with the theatre. The Story of the Nutcracker has a great mix of an exciting plot, interesting characters, wonderful choreography and humor that entertain children and parents alike. As I looked around the audience, I could see the faces of children with their mouths open waiting for the next words to be spoken and actions to take place.

In full disclosure, this was my family’s first trip to the theatre and I couldn’t be happier with the performance. The Growing Stage offered my family an introduction to the theatre in an environment that embraces children and gives them a show designed for them.  My husband and I knew that it would be difficult for my son to sit still throughout the performance. In all honesty, we knew it would be difficult for him to not throw a tantrum (or a few).

During the intermission, the Executive Director had a very simple and honest conversation with me about how my son wanted to be good during the show. Within this brief interaction, I realized how much The Growing Stage respects its young audience. They didn’t see a difficult toddler, but a young boy that was being exposed to acting, music and dancing. As a parent, I am so  happy that my children saw their first adaptation of the Nutcracker at The Growing Stage. It will be a pleasure for my family to return for many more productions!

The Nutcracker runs until December 21 on the weekends.

The Story of the Nutcrackers is playing until December 21, 2014 with performances offered on Fridays at 7:30pm and Saturdays and Sundays at 4pm. Tickets can be purchased on The Growing Stage website.

Enjoy the holiday tradition of The Story of The Nutcracker with your family!