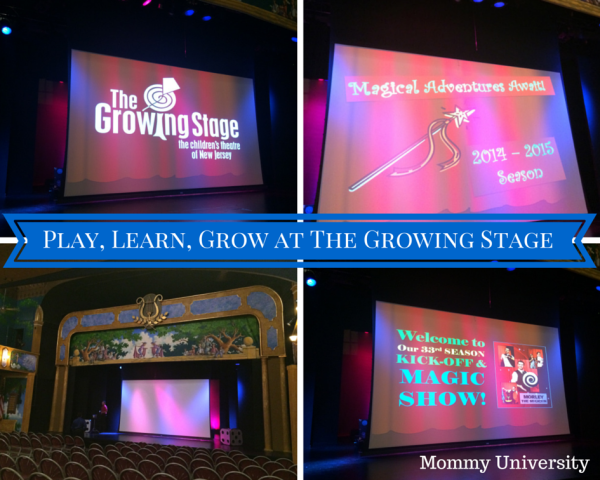 This season children and families can Play, Learn and Grow at The Growing Stage – The Children’s Theatre of NJ. Located in Netcong, NJ, The Growing Stage will offer an amazing variety of shows, events and classes for kids of all ages! This season expose your kids to the world of performing arts through these wonderful opportunities.

Kids in preschool through high school can participate in classes involving creative dramatics, performance and musical theatre. One-shot workshops are also available for older kids. All classes are process oriented instead of performance based.

Summer Arts Day Camp is available from July 6 – August 7, 2015 for kids in preschool through 8th grade. Under the instruction of professional artists, this camp allows kids to learn all about the theatre world including singing, dancing, acting and learning the art of stagecraft. Campers will learn to work together to create their very own piece that will be performed at the end of each week. Each week will feature a different theme for kids to explore.

The Growing Stage Annual Gala: Twenty Years of the Palace will take place on May 16, 2015. Attendees will celebrate the 25th anniversary of purchasing the Palace Theatre and the incredible effort it took to reclaim its importance in the community. The 2014 Blanche & Irving Laurie Foundation Award-winning play from this year’s New Play-Reading Festival will also be announced!

The TGS Ovation Awards will take place on May 27, 2015. During this event, two scholarships will be awarded to young people who would like to further their studying in theatre and/or education. Individuals who have made a significant impact on the mission of The Growing Stage will also be honored.

Disney’s The Little Mermaid will run from October 3 – 26, 2014. This amazing show will capture your heart as you are taken on a magical journey with Ariel and her friends as she follows her dream to be part of the human world. Theatre goers will enjoy Disney classics such as, “Kiss the Girl” and “Under the Sea.” This play is recommended for all ages.

The Story of the Nutcracker will run from November 21 – December 21, 2014. In The Growing Stage’s original adaptation, this classic ballet is transformed into a fully formed theatrical production. It is the perfect holiday performance to be enjoyed by the entire family!

The World Premiere of And Then Came Tango will take place on March 7, 2015 and run through March 29, 2015. This amazing play was inspired by two male penguins from the Central Park Zoo who were very determined to be parents, and when given an orphaned egg, they successfully raised a baby fledgling. This amazing production uses dance, storytelling and live music to celebrate families of all shapes and sizes. This play is recommended for ages 7 and up.

A Year with Frog and Toad will run from April 17 – May 10, 2015. This fun and whimsical show follows two friends through their adventures during all four seasons. The two best friends celebrate their differences that make them unique. This is the perfect show for the entire family as it is witty, enchanting, charming and upbeat! This play is recommended for ages 4 and up.

Canterbury Tales will be presented January 30 – February 8, 2015. Each young actor participating in this series will get a chance to shine during the presentation of this classic story.

Commedia Del’Arte Studio Piece will be presented June 5 -14, 2015. Actors will use physical comedy and the use of a mask to entertain audience members. A specific title will be announced soon.

Bat Boy: The Musical will run July 18 – August 2, 2014. This musical comedy/horror show is based on a story from The Weekly World News about a half bat/half boy creature that is found and taught to act like a “normal” boy. Actors will be both high school and college-aged students.

Stage 1 will take place from November 7 – 9, 2014. During Stage 1, four brand-new plays chosen out of 100 submissions will be read in front of a live audience. At the end of each reading, families can discuss their opinions with the professional team.

Stage 2 will take place from February 27 – March 1, 2015. During Stage 2, the four plays return after making revisions suggested during Stage 1. Following this round, one play will be chosen by The Growing Stage staff to receive a fully-mounted performance during the 2015-2016 season.

See something you like (everything I’m sure)? You can purchase tickets and sign up for classes on The Growing Stage website. Season Passes are also available!

Want to read more about The Growing Stage? Check out our review of their 33rd Season Kick-Off Show!