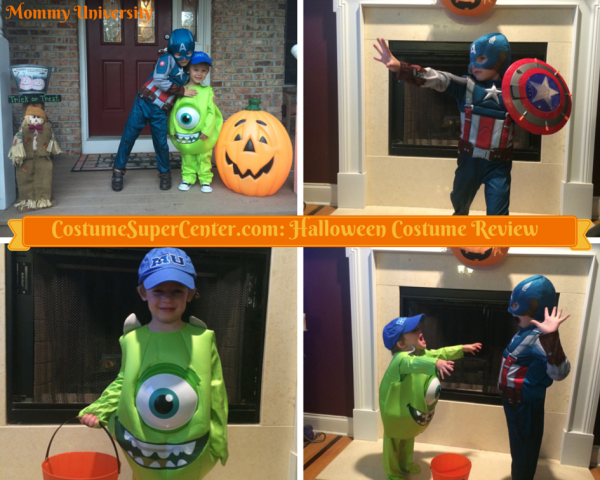 In full disclosure, I was provided two costumes from costumesupercenter.com in exchange for my honest review.

Since I was a little kid, Halloween has always been my favorite holiday. Of course I loved all the candy, but what I really loved was pretending to be someone else for the day! It was so exciting to dress up and be a princess or a pirate or a rock star! It was the one day during the year that I could be something or someone else!

My kids also have that excitement and love for Halloween. Since last year, my son has been talking about what he wants to be for this year, and surprisingly it has not changed. He insists on being Captain America! Lucky for me Costumesupercenter.com had exactly what my son wanted. He was so excited when he saw the “awesome” (his words) Captain America 2 Retro Muscle Costume on-line! His face lit up and he could not wait for it to arrive.

When the costume arrived, very quickly I might add, he could not contain himself! He had to put it on that day. I loved seeing his excitement and enthusiasm. What many people don’t realize is that pretend and imaginary play such as role playing with costumes is a great way to boost brain development. So of course I was happy to comply with his request!

Tyler was so excited to put on his awesome Captain America Costume! It fit perfectly!

Now I could not leave my younger son out! After looking through all the amazing and fun costumes on Costumesupercenter.com, Trevor found the perfect costume! Due to his love (I mean obsession) with Monsters University, we decided that the Mike Deluxe costume was perfect for him. I love when kids are at an age when they can make their own decisions, with our guidance of course. This makes them even more excited about Halloween. Costumesupercenter.com made it so easy to view and choose costumes!

When the Mike costume arrived, my little one was just as excited as my older son. His face lit up, and he begged to put it on right away. The costume was so adorable, how could I not comply?

What I LOVE about these costumes:

Well-Made: The material is durable which is so important when dressing little ones. It stretches nicely without the fear of ripping which is especially great for kids as they often pull on their sleeves and get their pants caught under their shoes. I was not worried at all about them destroying their costumes as they played around the house. This means, these costumes are also great to use year-round for pretend play and dress-up!

Comfortable: Often times when you put kids in costumes they whine and complain about it being itchy or uncomfortable but not this time! My boys were happy as could be in their Captain America and Mike costumes. My little one was even okay with wearing the MU hat which can be difficult when dealing with a 2-year-old. Both boys wanted to keep their costumes on ALL DAY! The material was very soft which is especially important for children with sensory issues.

Easy To Put On: It’s wonderful to have a costume that a 5 year old can put on independently! It’s also great to have costumes that don’t require too many buttons, zippers or ties. Both costumes were easy to put on AND take off! My 2.5 year old was even able to pull his body suit down independently which is a definite plus when potty training!

Now we all know that costumes are fun on Halloween, but did you know that wearing costumes anytime of year can help boost child development?

Playing dress up encourages kids to engage in imaginary and pretend play. This helps develop their creative thinking skills which is needed for academic success. Role playing also helps increase language development. Kids love to wave their fairy wand and grant wishes or pretend to protect the universe or even pretend to be the king of the jungle, but while immersing themselves in these imaginary worlds, they are building their vocabulary and social language skills.

I highly recommend checking out Costumesupercenter.com for all your Halloween costume needs, but don’t just encourage pretend play and dress up during the fall season. Let your kids explore their creative side year round by creating a dress up box full of fun and exciting costumes!

Want to buy the Boy’s Captain America 2 Retro Muscle Costume? It only costs $29.99.

Want to buy the Toddler Monsters University Mike Deluxe Costume too? It only costs $34.99.

For both costumes, discounts are also often available on the website!