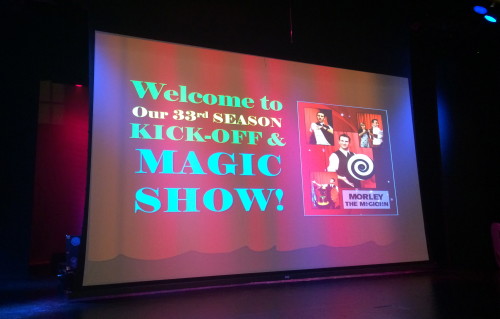 My family and I were lucky enough to receive tickets for the 33rd Season Kick-Off Event and Magic Show at The Growing Stage located in Netcong, NJ. We were so excited for the show especially since my son is all about magic these days. Before we even entered the main theatre we were awed by the gorgeous paintings on the walls. Right away you feel transported to a magical world full of whimsy and adventure.

Upon entering the theatre we continued to be amazed by the artwork displayed on all the walls. The bright and colorful paintings represented numerous characters well-known in the theatre world. These included Pippi Longstocking, Peter Pan, Snow White, Sugar Plum Fairy and the Queen of Hearts. The paintings also adorned the balcony and stage. I was captivated by the gorgeous chandelier dangling from the ceiling.

Everyone was so excited for the show! What a great family night out!

We quickly grabbed our seats then headed to the back of the theater to the magic table. A young man was performing fun and interactive magic tricks which my boys loved! They were so excited to be active participants in a few of the tricks, and they were awed by the results. In the back of the theatre, there was also refreshments for sale for only $1. You can’t beat that!

Prior to the show, the audience was welcomed by the Executive Director, Stephen Fredericks. He was followed by Danny Campos, Audience Development Director, who introduced the new logo and website! The exciting upcoming season was also presented which will be one you won’t want to miss! After the announcements we were lucky enough to get a sneak peek at Disney’s The Little Mermaid!

Cast members fresh off an all day rehearsal captivated the audience with their amazing voices. The actress playing Ariel is perfect for this role as her facial expressions and vocal stylings were full of Disney magic. I also truly enjoyed a musical piece performed by the cast including a young boy who plays Sebastian. Lastly, we enjoyed an excerpt from Ursula’s famous song, “Poor Unfortunate Souls.” I cannot wait until this show opens October 3rd!

Another exciting part of the kick off event was all the great giveaways and prizes. As patrons entered, each family received a raffle ticket. Throughout the night, tickets were called for prizes such as tickets for upcoming shows as well as a magic kit. You could feel the anticipation and excitement in the audience when the numbers were called then the screams of happiness as families won the amazing prizes!

As soon as Morley the Magician took the stage, he captivated the audience with an adorable routine using a dry erase board. My son had the biggest grin across his face as he watched the first magic trick. As the show progressed, each trick was even more interesting and intriguing than the next. Morley was an animated and enthusiastic performer which made the show even more sensational. It was the perfect magic show for individuals of all ages.

Here is what we LOVED about Morley the Magician’s Magic Show:

Interactive: Morley picked audience members to help perform various tricks. It made kids really feel like they were part of the show. Some kids (and adults) got to live out their dream of being a magician! The interactive nature of the show kept kids engaged and attentive which, let’s face it, can be difficult. My 5-year-old was mesmerized throughout the entire show. He participated, laughed and clapped showing a true love for magic.

Mystifying Illusions: Morley presented some amazing illusions that made me really wonder “What just happened?” and “How did he do that?” My favorite was when he had the audience stare at a moving spiral (reminiscent of the twilight zone) for 30 seconds, when the time was up it appeared as if his head was swelling/growing! It was amazing!

Great combination of comedy and magic: Morley was a wonderful magician but he also brought humor to his show making for a fun theatrical performance to be enjoyed by individuals of all ages! The grand finale was hilarious! It engaged the entire audience. My son laughed so hard he was almost crying. As a parent, seeing your child so happy is the best feeling in the world!

I would like to thank the Growing Stage for allowing us to be a part of this magical night! I highly recommend checking out the upcoming season full of amazing performances. For more information, please go to their new and improved website!

Stay tuned for our article all about their upcoming 2014-2015 season!